Experience Japan from the moment you step onboard

For those who can’t sleep on planes, the daylight nonstop service between Sydney and Tokyo Narita is a godsend. Departing at a reasonably humane hour of 815 a.m., it arrives in Tokyo Narita around five in the evening. It is perfect timing to enjoy dinner in Tokyo, or for a seamless connection to Osaka, Sapporo, Nagoya, Fukuoka or Naha, all in time for a supper at your final destination.

For passengers continuing to Europe or North America, JAL provides complementary overnight accommodation just minutes from the airport, and you can through check your luggage to your final destination, making it super convenient and stress free. JAL has also started flying their Boeing 787-9 Dreamliner flights from Australia to Japan. The economy class seats are an incredible 18.5 inch wide, same as premium economy on British Airways or Lufthansa.

Now that you are likely to be awake for most of the flight, it’s time to check out the service and facilities on the flight. For an 815 am morning flight, there is no breakfast. At first, I thought this was an oversight. Then they served lunch at 10 past ten in the morning. While a 1010 am lunch seems like bad service, but considering many passengers had eaten breakfast at 6 am to make this 815 am flight, it is actually Omotenashi, or the spirit of considerate Japanese hospitality. To me, it is these small considerate acts of kindness that makes the difference, from the complementary creative children’s toys and activity packs, to the extra assistance putting luggage up during the flight, much to the relief of parents who are constantly packing and unpacking items for their kids.

The flight crews are attentive and kept busy throughout the day, from the endless supply of beverages to the airy crackers that pop in your mouth. For lunch we had soba noodles in a stock that was so light and fresh you want to drink the stock whole, and personally go up to the chef for hand grating the ginger garnish for the 300 passengers. A western style lunch was also available. It would have been better to have a menu card or at least announce the choice of menus beforehand, so passengers could have time to think which selection they would like, as well as what beverage they thought best complements their meal selection. The other thing to remember is that being a long flight at ten hours, it would be good to bring your own hand cream, as you are likely to wash your hands more than once with the numerous meals you are going to partake, and unlike business class, you won’t have hand cream in the bathrooms. They were kind enough though to provide toothbrush and mouthwash sets in the afternoon.

After lunch we all got personal tubs of chocolate ice cream. Rich and flavoursome, it was so good that it brought back memories of childhood getting ice-cream from the vendors in the park. I almost wanted the toy planes the 5 year old in the seat on front of me got.

As this is the only daylight direct flight between these two Pacific hubs, spending a day on the plane affords you the opportunity to do a bit of people watching, from the toddler flapping around like a seagull to the kids playing endlessly, their attention locked on the video game stations.

When the quiche came out for afternoon tea the Japanese would meticulously use their knives and forks while the few Australians on-board would eat it, meat pie style, perfectly balancing it on one hand from years of experience.

The return flight from Tokyo to Sydney is overnight, it's timing almost in tandem with its oneworld sister airline Qantas, like two cranes flying together across the pacific. The 3-3-3 economy class seat configuration means you unlikely to stretch out flat bed style on an empty row of 4 economy seats that you find on the Qantas 747, but in these days of fiscal conservatism and tight yield management you are unlikely to come across too many empty seats.

On a ten hour flight the entertainment is paramount. The audio selection is impressive, especially their Japanese pop which has dedicated channels for each decade. So whether you are a teenager or wanting some old time Enka folk music, they have got it covered. Even if you haven’t heard Japanese popular music before, it is worth giving it a try, with artists like “Bump of Chicken” and “Acid man” taking my fancy.

The movie selection is good too, and while the English language collection is a bit limited compared to Qantas. They do have some old favourites like Bridget Jones Diary, for those wanting to catch up on their movie education. There is also a solid selection of Chinese and Indian films, though they are limited to Japanese subtitles.

Their highlight is the Japanese new releases, with a number of titles being released prior to the Japanese Film Festival. I saw this movie called soup, where the dead had more life than the living. It was like the dead had something to teach us about living life enthusiastically no matter what the circumstances were.

After three weepy Japanese movies and what seems like a never ending beverage and meal service, I am in a state of bliss. Soon we would land; it is like the space ship will dock on another planet, one like a fairy tale. I once left my umbrella in a convenience store in Osaka, but in the Peter Pan like world of Japan, I found it, untouched, the next morning. It is like the land of the happily ever after, only real. Someone in a movie once said that fairy tales are not lies, but gifts for the heart.

Welcome to Narita, Japan, the land of fairy tales. It is no wonder that Narita sounds like Narnia 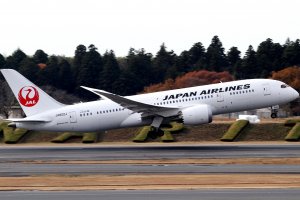