JR Hakata Station is Fukuoka’s biggest and the busiest in Kyushu. First opened in 1889, the station provides access to all of Kyushu as well as the rest of Japan with the Shinkansen. It’s also the key station for travelling around the city. It was remodeled in 2011, creating more space, more platforms, more shops, and more restaurants. The station has a modern, open feel, and even at night it’s bright and welcoming.

The station connects to the Kuko (Airport) Line of the city subway, the Kagoshima Main Line, the Fukuhoku-Yutaka Line, and the Kyushu and Sanyo Shinkansen Lines. The subway is recommended for places like Ohori Park and the Zoo. Buses to Tenjin, Canal City, Fukuoka Tower, and the Fukuoka Dome are straight outside the Hakata Exit at the street and in the bus centre building to the right after exiting. The bus center also hosts long distance buses. Kushida Shrine, which hosts Yamakasa, Fukuoka's premiere festival, as well as several temples and the Hakata Machiya Folk Museum, are a short walk away. If you’re staying in Fukuoka or just travelling on to other destinations in Kyushu, South Korea via ferry, or to international flights, you’ll no doubt be passing through Hakata Station.

The station staff are trained professionals, even those simply greeting you at the ticket gates. In the middle of the ground floor you will find a large information centre with English speaking staff where you can get maps and pamphlets about Fukuoka City and the surrounding areas and even get help organising sightseeing trips and accommodation. There is a telephone translation service available in Chinese, Korean and English. Nearby is also a large JR travel office.

The station serves travelers as well as the inhabitants of Fukuoka and is a destination in and of itself. This is one of Fukuoka’s major shopping and entertainment areas; the many, many restaurants and shops make it tempting to get there well before your train leaves. You can pop into a café, sit back and watch the salarymen go by. Quick restaurants are mostly in the basement level and there are two floors of fine dining at the top of the ten-story JR Hakata City building above the tracks. Besides the restaurants on the upper levels, there is also a top-notch multi-screen cinema complex and a rooftop terrace with views, a shrine, and a kiddie train. On the ground floor, on the north side of the Shinkansen gates, there are also several kiosks where you can buy good souvenirs. The station houses two department stores, Hankyu and Tokyo Hands, as well as a large number of shops on the second to eighth floors and the adjacent bus centre building. Although Hakata is the city’s business district, the area surrounding the station is vibrant; during the day you can walk the 10 minutes to Canal City, or in the evening you can visit one of the nearby karaoke boxes, bars or izakayas and head home on the last train! 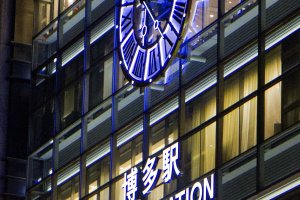 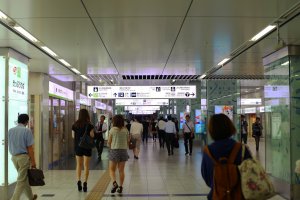 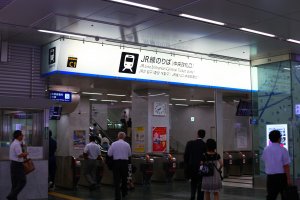 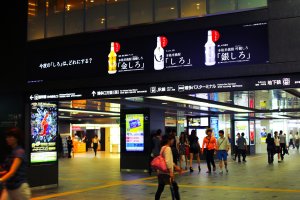 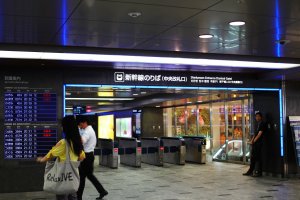 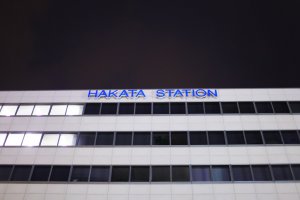