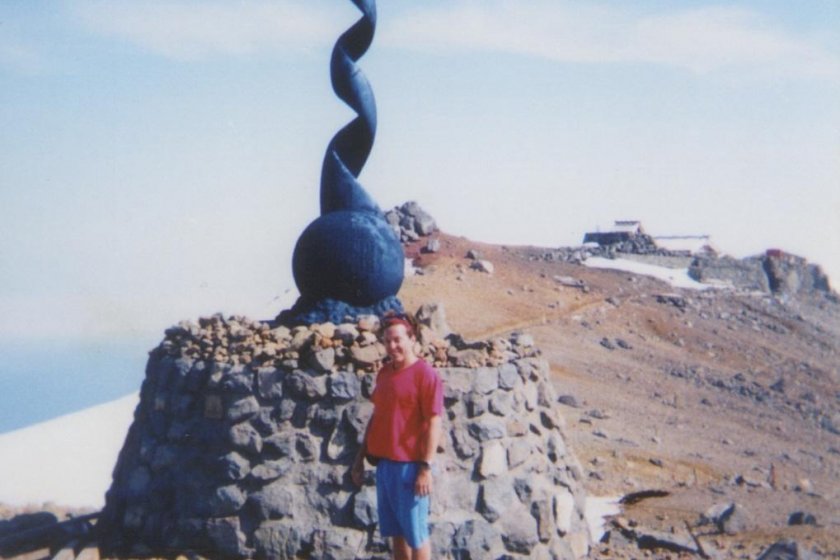 Japan has many beautiful mountains. Ontake-san[御嶽山] on the borders of Nagano and Gifu prefectures is one of these. It has an altitude of 3,067 meters and is one of Japan's highest mountains. Precise ranking I suppose depends on what constitutes a peak upon a ridge. In any event, Ontake-san, like Mount Fuji, stands alone, which provides for splendid views from the top.

Clear skies were in the forecast when I decided to visit Ontake-san in April. Even though growing up in the U.S.'s Midwest I became disenchanted with snow, perhaps because it was my job to shovel the driveway, snow is one of the three natural things held in high esteem by the traditional Japanese aesthetic, moon and flower being the other two. I thought it would be nice to see some after a long while.

I hitched a ride from Nagoya with interesting people who enjoyed English conversation and rest stops. By the time I arrived at the elevated trailhead it was after noon. I started off and the trail quickly disappeared into the flat's deep snow. I attempted to walk atop the crust, but invariably fell through up to my thighs. This was tricky as I had to be careful not to walk too close to trees where roots may be exposed.

I gained some altitude and spotted the ridge, imagining where the trail might be. I passed a shrine and tomb site with a few statues of seated, human figures. As I moved in for a closer look, their eyes scintillated with red light. Perhaps they were inlaid with some type of glass. Anyway, it gave the statues an ethereal quality.

As I moved up on the ridge, I encountered a sulfurous odor. The grade steepened, the snow deepened and I had to slog, but I was near the top. The summit, lying directly beneath the sun's rays, had less snow. I breathlessly enjoyed the panoramic view and the scarred, jagged landscape.

Ontake is a volcano, and it certainly looks like all hell broke loose up there at one time or another. I went down for a closer look at the steaming vents in the crater, and then moved up to sit on the peak and once again marvel at the 360-degree view. Just below me was a lake. The ice was a beautiful blue, and I wanted to go down for a closer look, but the day was waning.

I followed my footprints back down. By the time I returned to the trailhead it was almost dark, so to gain time I jogged/slid down the ski slopes, rather fun actually. I returned to the road briefly, and saw the approaching headlights of what must have been the last car on the mountain. I was muddy and wet and kept my thumb in. But in one of those random acts of kindness, the red brake lights came on and she backed up to offer me a ride.

I got in the back and sat up primly with my toes on the mat trying to minimize my muddy calling card, and returned to the main road. 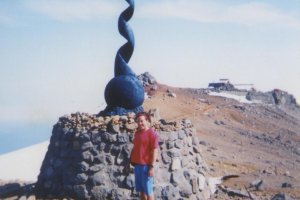 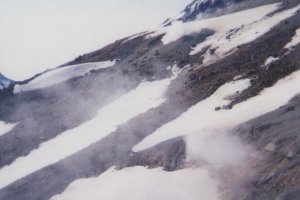 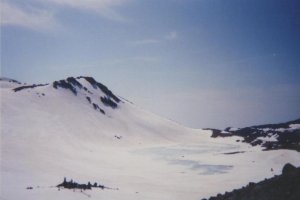