Rice Field Art - are you picturing a gallery in a rice field? Because when I first heard the buzz about the rice field art in Gyoda City Saitama, that is what I pictured. In my defense, I am not from a rice growing country so my mind didn't go to the glorious truth; art made from rice plants in a rice field. It is a sight to behold. And the great news for anyone coming to Kumagaya for the Rugby World Cup is that the rice art is only twenty minutes (by car) from the Kumagaya Rugby Stadium.

Every year, in June, the rice is strategically and carefully planted so that it grows in the design of the image for that year. The image is decided on by a committee. Planting is a community effort. Dozens of locals and even people from further afield, who have applied to participate, work together under the guidance of the rice field art committee to plant the rice in the correct position.They use nine different types of rice for contrast, over an approximate area of 27,000 square meters.The result: a piece of art in the rice field. Every year the image is different.

The 2015 depiction, pictured above, was the one that won the Guinness Record World as the largest rice field art in the world. This year we are in for a real treat with the 2019 depiction taking on a Rugby World Cup theme. Three of Japan's rugby heroes, including the team captain Michael Leitch holding a rugby ball, will be featured in this year's art. The committee decided on this image in support of the Japan team.

Countries playing in Kumagaya for the 2019 Rugby World Cup:

The image should be visible from around early to middle of August with best viewing in early September. The image usually remains visible until early October, although toward the end it is not as clear or as dynamic. It can be seen from the observation tower of Kodai Hasu no Sato, which affords a birds eye view. Kodai Hasu no Sato is most famous for the ancient lotus that were found on its grounds in 2000. The variation of the lotus were believed to be extinct for 1400 years before the incredible discovery at the turn of the century.

Entrance into the observation tower, which is also home to a small lotus museum, costs 400 yen for an adult and 200 yen for children six years old or over. The tower is fifty meters high and gives a 360 view of the park, Gyoda city and the surrounding areas.

From the Kumagaya Rugby Stadium: Head northeast to route 364. Turn left on to route 125 in the direction of the signs for "Kumagaya". Drive about 7.5 kilometers, approximately ten minutes and turn on to route 303. Follow the signs for Kodai Hasu no Sato. Total journey between 18 and 25 minutes depending on traffic.

By public transport: You can get a city loop bus from Gyoda Station on the JR Takasaki line to Kodai Hasu no Sato. 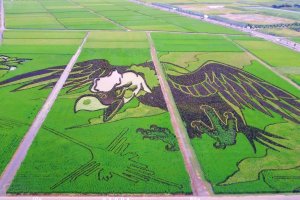 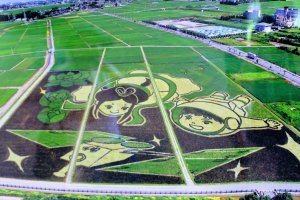 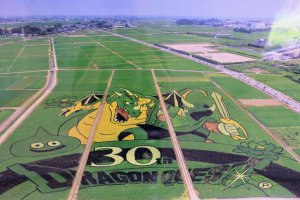 Elena Lisina a year ago
Incredible!!! Do they create one picture in a year or few?
Reply Show all 2 replies

Lynda Hogan Author a year ago
Just one in this particular area. I think most of them create one picture with maybe two or three elements in it. I have seen a photo of one place with five different pictures, but unfortunately I didn't bookmark it and I can't remember where it was. Just did a search and its not bringing it up. Sorry
Reply

Elena Lisina a year ago
I bet to see more than one picture is possible only from a plane or a helicopter! : )
Reply

Elizabeth S a year ago
Great photos! The space themed one is so charming. Is it Kaguyahime?

Lynda Hogan Author a year ago
The theme was 未来へつなぐ古（いにしえ）の奇跡 ~ finding it hard to put natural English on that! Past miracles carrying us to the future... a miracle of yore to connect to the future?? I just assumed it was Kaguyahime, but it didn't actual say at the site.
Reply

Kim a year ago
The scale of these is so impressive!
Reply Show all 2 replies

Lynda Hogan Author a year ago
There are some really stunning ones up North now too. THey look bigger than this to me, but it might just be the angle of the photos. Or maybe they are gearing up to snatch the world record from Gyoda!
Reply

Kim a year ago
I saw some similar to this on a road trip in Tōhoku a few years back, I think it was Yamagata Prefecture. I was completely amazed! I don’t know if it was for a competition or just a festival but it was cool nonetheless!
Reply
8 comments in total