I was going to try and bike this one, but this kind shopkeeper warned me: Don't do it Slim, prompting an elderly customer to tip his head back, scrutinize me with one eye, and remark tongue-in-cheek: Naw, he's thin enough.

At my age, the shopkeeper was probably right. One of my 108+ vices, a virtue in the secondary equities market, is that: I don't listen to anyone else's advice. So, I decided to bike it. It was like going up a mountain. It was going up a mountain. As I enjoyed the country landscape, I started to run some of The Cramps' songs through my head, but that association started to produce real-world results. So I started to wonder which came first: 'Bikini Girls with Machine Guns' or that final scene in Gokudo No Tsuma. Who inspired who?

It was hot. Fearing that I was on the wrong road, I stopped to ask a woodcutter where it was. He didn't say: forward or onward, he just said 'up.' Having dropped a few pounds in water weight, aware that I needed a hair-cut, dizzy, with heart palpitations, I finally reached the top.

The waterfall itself is beautiful, very backwoods. It's about a ten-minute hike from the road down there. There's a sign warning you to look out for bears. Funny, I didn't know there were bears in Shizuoka prefecture. If you do see one though, and it chases you, run like hell, zigzag. I was certain I was the only one up there so I took a dip.

Due to the haphazard planes and angles of the rocky terrain, it is difficult to determine the height of the waterfall, and probably requires special gear, maybe a rope. The main cascade is about 70 meters high, with a few lesser tiers. Right after heavy rains, or in spring thaw, it must really be pumping, but the risk of landslides should not be overlooked.

Refreshed, I returned to the road and made my way back. As I rummaged through the popsicle bin, unable to find my favorite one, the shopkeeper asked me if I had made it. I told him that I had. He asked me if there was water up there. I replied that there certainly was, a lot of it pouring over the ridge. We agreed it was because of the relatively recent rains.

To get there, take Route 362 northwest from Shizuoka City for about 15 kilometers, turn right onto Route 60 and go about 25 kilometers up to the falls, veering right where the road forks. If you're in a car, the road can become dicey higher up because of landslides. After that, there's a glade, a logging camp, where the road widens briefly with a big sign above it that tells you the falls are two kilometers away. 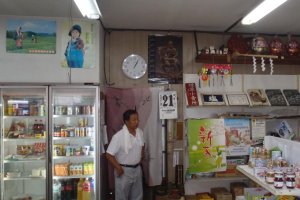 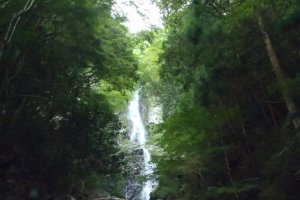 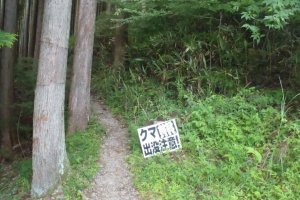