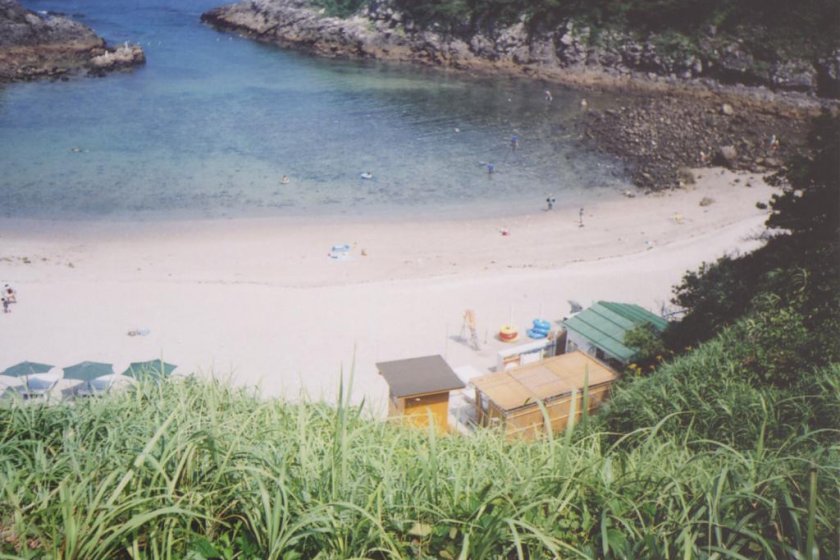 With my American cousin

The seven islands of Izu, easily-accessible by ship from either Tokyo or Shimoda, are relaxing getaways. Upon my cousin's first visit to Japan, I decided to take him to Shikinejima [式根島]. Taking each other to remote places is a family tradition. Perhaps we do it to create conversation. My cousin is two-meters tall. He has trouble bending his left leg. I wondered how he would find it here.

Before leaving Shimoda, I had done a couple of sessions at Tatado (see: 'Izu Peninsula South Coast: a Water Lover's Guide' article) and, instead of leaving my surfboard on the car where I imagined it might get ripped off, I took it along. In a marked contrast to the nearby island, Nijima, Shikinejima is too rocky and the coastline is too indented for surfing. The proprietress at the guesthouse we stayed in (the usual accommodation on the islands) was aghast that I had brought a board. She couldn't get over it, and repeatedly wondered aloud why I had done such a thing in front of the other guests.

That night at dinner, because nobody else wanted theirs, I ate four large sazae, a type of sea-snail. Sazae are quite chewy. I was a long time at it and thought this might bring me some measure of respect from the proprietress. The next morning my cousin had his first encounter with a Japanese-style toilet with tragic results. We shrank before the specter of doom. The proprietress's son however, a wonderful young man who sort of acted as housekeeper, took care of it and we were out the door.

Shikinejima is small and we explored it by rent-a-bicycle and on foot. The seaside hot springs on the southeast coast are orange-colored due to the high concentration of iron in the water. Just past these, moving westward, are a few smaller hot-spring pools that are so close to the ocean that when the tide comes in, the lower ones fill with sea water and you need to move up to the next one if you want to stay warm.

The prime beaches are on the west coast in the form of protected coves. They are excellent places for children, as long as they don't fall on the rocks, and superb for diving as the visibility is excellent. When you fin-kick out toward the mouth of the cove and open ocean, the surge and current intensify and the prevalence of underwater life, including the occasional octopus, increases.

The proprietress and her son bid us a fond farewell. As my cousin and I lounged outside on the starboard deck on the way back to Shimoda, a huge shark surfaced and swam parallel with the ship. In the past, on the way to another of the seven islands, I had seen flying fish launching themselves before the ship as it plowed through the water, but this was a first. We watched in silence as the shark kept pace with a seemingly effortless glide. A crew member watching over our shoulders was equally enthralled. 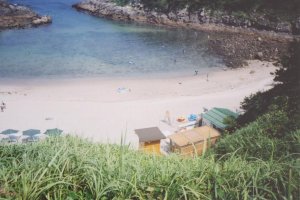 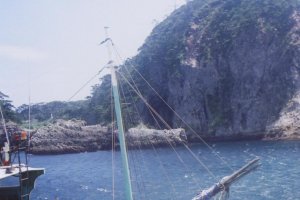 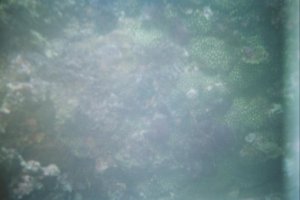