Fishing in the middle of Tokyo?

You'd never think that fishing in the middle of Tokyo would be a possibility, let alone a reality but welcome to the world's never ending city. Sitting along the Kanda River in Shinjuku City lies the irrepressible Ichigaya Fishing Center and what a place it is.

A dream haven for the urban angler, the Ichigaya Fishing Center has been in operation since the 1960s and, along with its goldfish pond and five much larger carp-filled pools, comes complete with shop and aquarium filled with fish for sale.

Those new to fishing can wet their feet at the mini-fishing pond where scores of children (and their beginner parents... ) do their best to land as many goldfish as they can in a set time period. Collected in a small net, the goldfish can be taken home for a small fee though its quite common to simply return the goldfish back into the water.

Seated around the much larger pools is where you'll find the quasi-big boys plying their trade. A fantastic sense of the blue-collar permeates this place as veteran visitors and those imagining themselves to be all sit alongside each other on upturned crates and try their hands at catching carp weighing in at around at a solid one kilogram.

Prices for the mini-fishing begins at JPY500 for a 30-minute session with a JPY100 charge for taking the goldfish home. The carp fishing fee for an adult ranges from JPY780 for an hour to JPY2910 for a whole-day session. On weekdays, the centre opens at 9:30 am and, depending on the season, will close between 6:30 - 7:30 pm. Weekend times begin at 9 am and, again depending on the season, closes between 7 - 8 pm.

Take the Toei Shinjuku Subway Line or the Metro Namboku or Yurakucho lines to Ichigaya Station and head out Exit 1. The fishing center is no more than a 1-minute walk away. 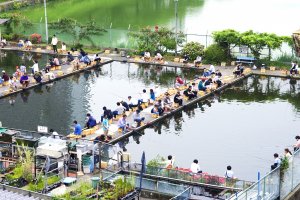 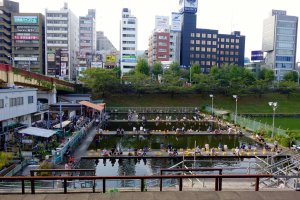 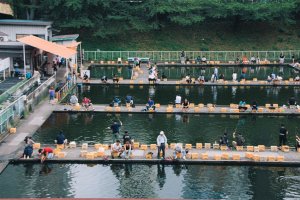 Sherilyn Siy 11 months ago
¥500 for a 30 minute session is a great price to just get your feet wet.
Reply Show all 1 replies

Sleiman Azizi Author 11 months ago
It's not bad at all. A bit of fun and some good times with the kids as well.
Reply

Kim 11 months ago
I've seen this from the train a number of times and was always curious about it!
Reply Show all 1 replies

Elizabeth S 11 months ago
Me, too! When I used to commute into Tokyo, I always looked out for the fishing center.

I had a look at the shop there - it's pretty comprehensive with fish and aquarium goods.
Reply

Sleiman Azizi Author 11 months ago
Ahaha, I didn’t consider that but yes, you're right.
Reply
6 comments in total