A glimpse of nightlife unique to Japan

It is Friday night. I was with Nana and Maya, savoring many kinds of seafood in a local izakaya near their home in Nakano. That was my very first time eating a jumbo-sized tuna off its bones using clams, as well as my first tasting of an uni or sea urchin. These two friends of mine knew exactly how to introduce local delicacies that are totally new to me and I really believed that they still had more surprises under their sleeves to show me. I was right. After we paid for dinner, and claiming that they had no other plans, a brilliant idea just struck into their minds. An idea that would bring me to another super local experience I never thought I would ever had.

Since we wanted to catch up more on each other's life story, Nana came up with just the perfect place to just sit down and talk. A place only known by locals. A place she knew I never been to. And when I asked her where we were heading, she answered, "Sunakku."

That word was totally unfamiliar to me. I didn't know what type of a place it was, I couldn't even picture any images in my mind. But since this idea came from Nana, which was immediately approved by Maya, I couldn't help but think that this would be an incredible thing for me to do tonight.

We stopped by an typical apartment building with a small stair leading underground. Nana led us down and we found ourselves in front of an unassuming, regular door. But behind that door I could vaguely hear music playing and people singing. I once did a karaoke in Japan, but I knew exactly that a Japanese karaoke place wouldn't ever be placed in such non-commercial place, hidden below the surface, guarded by a very modest entrance like this.

Nana peeked a little inside, but immediately closed the door, gesturing that it was so crowded inside and that the place wouldn't fit three more people. This made me be more confident that it wasn't a karaoke studio, because it seemed that it was so cramped inside. Not long after the door was opened, and two salarymen walked out, giving us a sign that now there were enough space for us.

What I saw inside really surprised me. A very small drinking place with just six to seven stools placed by a wooden bar, with an old lady as the bartender. And that was it. So tight! The empty spots for us were across the entrance, so we had to walk carefully and squeeze ourselves behind the other stools which were occupied. I think I once saw this kind of place on television, but never had I known that it was called sunakku.

We placed our orders—which were offered, prepared, and served by the same lady. She was the only one tending the bar. Behind her stood a giant cabinet full of bottles of various alcohols, some of which were labelled with people's names (I later found out that those bottles were owned by the visitors of the bar who decided to just leave their purchased drinks so they could come back later and drink from the leftovers). This part of the place looked similar to regular bars, though there was one crucial thing that made it quiet distinctive: the presence of a karaoke machine, complete with the screen.

This was what I heard from the outside before. Sunakku, apparently, is not just a regular bar -- or a bar that, based on its name, serves snacks for visitors to spend their time in. It is common to find a karaoke facility in a sunakku establishment, where visitors can freely choose their favorite songs and sing along, with no time limit, and no additional cost! I really love doing karaoke, and Nana knew that, so she decided to take me to this kind of place! Too bad by the time we arrived, the karaoke machine was used by two young salarymen. They were there before us, and were singing when we entered the bar. I wouldn't never forget their song "Under the Sea" from Disney's The Little Mermaid, which lingered in my head even today because I love Disney, and because the song was sung in Japanese.

No rush, though, so we just chatted first, updated each other's stories as planned, while Nana explained to me all the details on sunakku, and Maya had a friendly conversation with the old lady. This kind of atmosphere is typical of a sunakku: visitors coming in pairs or small groups getting to know each other through talk, drink, and karaoke; meanwhile they who come alone will be interacting with the bartender which, not only in this sunakku, usually work alone.

The karaoke machine was vacant. I took this opportunity to channel my inner diva, and to show off my skill in Japanese (which unfortunately, applied to songs only). It felt really, really delightful to be able to experience all this in just a short visit to a place that is actually common to locals, but extremely memorable for tourists like me. This might be a chance that I wouldn't ever get to enjoy if I didn't know any local friends. I am still so grateful that I got to feel something that was so rich in Japanese culture! 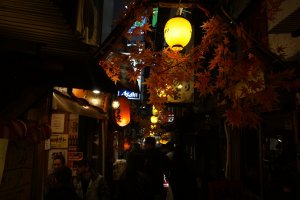 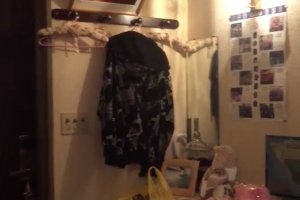 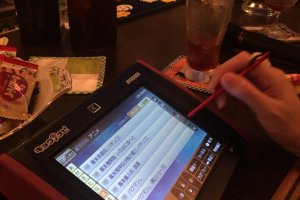