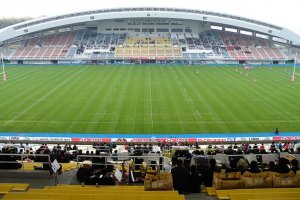 Fukuoka Hakatanomori Stadium, also known as Level 5 Stadium, has 22,500 seats, many of which are so close to the field that the audience really feels they are part of the action.

A practical factor is the stadium's proximity to Fukuoka International Airport, which is only a 15-20 minute walk away. Both football and rugby matches are regularly held at Fukuoka Hakatanomori Stadium. Games were also played here during the 2019 Rugby World Cup.

The stadium is located in Higashi HiraoPark, which includes a baseball and tennis facility, an athletics stadium and the "Accion Fukuoka", which consists of a hall and a swimming stadium.

The b hakata, Fukuoka

The B Hakata is a business hotel 5 minutes away from JR Hakata train station, and is located in the Hakata ward of Fukuoka City.

A limited-time afternoon tea event at the Miyako Hotel Hakata will incorporate the pastel colors of sherbet into the dishes on offer...

Goodbeer Stand has 25 beers on tap at any one time, including both local and international brews. There are also some great, hearty..

I have tried quite a few yakitori places in Japan and I can reassure you this one is truly awesome. Most restaurants realize t..

Canal City Hakata (キャナルシティ博多) is a large shopping and entertainment complex in Fukuoka, Japan. Called the "city within the city," it boasts..

The Kushida Shrine of Hakata is one of the oldest shrines in Fukuoka. Famous for its Hakata Gion Yamakasa Festival, this shrine has many amazing attractions..

Sumo is the national sport of Japan and holds a special place in the hearts and minds of the nation. Fukuoka Kokusai Center is to Fukuoka what the Ryogoku..