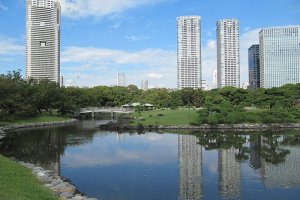 Hamarikyu Gardens is a traditional landscape garden located on the edge of Tokyo’s Sumida River. During the Edo Period (1603-1868), the grounds were used by successive members of the Tokugawa Shogunate. A small residence was built and the shoguns and their retainers would use the duck hunting ponds on the grounds for sport. The garden changed hands during the Meiji Restoration and became the property of the Imperial Family, with the new name of Hama Detached Palace.

After suffering damage during both the Great Kanto Earthquake of 1923 and the air raids of 1945, the garden was given over to the city and opened to the public in 1946. Today, Hamarikyu is one of the nine gardens in the Tokyo Metropolitan Garden system.

The garden encompasses 62 acres on the edge of the Tsukiji and Shiodome neighborhoods. The garden’s large pond is the only remaining seawater pond in Tokyo, and sluice gates in the garden regulate the water level based on the tide.

A beautiful spot for a restful break in the garden is the Nakajima Tea House, which sits on an island in the garden’s main pond. The teahouse serves a cup of green tea and a selection of traditional sweet to visitors who prefer to enjoy the views with a bit of a refreshment.

In recent years, the city has also made great strides in reconstructing several of the historic tea houses that formerly stood in the garden. Both the Matsu no ochaya (Pine Tea House) and the Tsubame no ochaya (Swallow Tea House) have been rebuilt and stand ready to welcome visitors.

While the park is beautiful in any season, it is particularly known for its February display of plum blossoms and nanohana (rapeseed). One of the most impressive plants in the garden, however, is the 300-year-old black pine right inside the main gate, whose beauty remains constant no matter the season.

Explore one of Tokyo’s most attractive and historic landscape gardens in the heart of Shiodome.

Hama-rikyu is a beautiful garden located in the Shiodome area of central Tokyo. This is a family garden of Tokugawa Shogun. In..

Once a vacation home of a Daimyo, a Shogun and the Emperor, the water level of a pond inside this beautiful garden ebbs and flows..

Hamarikyu Gardens: Yes, it's possible to relax even in the big city of Tokyo. Proof that Tokyo has a great balance of Nature..

In the middle of March, at the onset of the spring, the flowers at Hamarikyu Garden in Tokyo start to bloom, with the rapeseed yellow..

Ume Blossoms at Hamarikyu Garden in Tokyo bloom in February, showing that Spring is just around the corner!

Motsu (offal) is their signature item, and they offer not the common motsu-yaki, but stir-fried motsu with different flavors depending on the type of..

Caretta Shiodome is a shopping and dining center in the Shiodome area of ​​Minato-ku. It is not only home to cultural institutions such as the Tokyo..

Encounter all types of fresh foods and traditional Japanese foods in Tsukiji’s Outer Market. The market combines wholesale and retail shops into cha..

When you think of Japanese theater, you also think of kabuki: demonic-looking masks, elegant kimonos and drums. Often stories are told of old warriors..