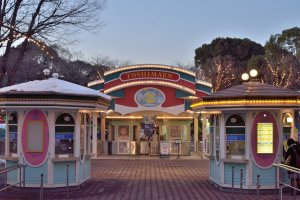 Established way back in 1926 Toshimaen, situated in Nerima-ku, is one of Japan’s oldest amusement parks. Currently owned by Seibu Railway Co. which also runs the train line (Seibu Ikebukuro Line) in which the park is located. Toshimaen holds a special place in many Tokyoites’ hearts.

With over 30 rides (including three roller coasters, a water park and six pools it has more than enough fun to satiate anybody’s thirst for amusement in Japan’s capital city. The park also plays host to cherry blossom viewing in spring and a popular ice skating rink in winter.

Toshimaen’s symbol and spatial hub is its much-loved 100-year-old carousel named “Carousel “El Dorado” which has been entertaining visitors for decades.

For anyone interested in going to Toshimaen, however, time is unfortunately running out for this historic amusement park. It was announced that it will be replaced by a Harry Potter theme park due to open its doors in 2023. Seibu Railway Co. has been in negotiations with Warner Bros. Entertainment Inc. (producers of the smash hit film series) and the Tokyo Metropolitan Government over the future of the site.

Toshimaen officially shutters its doors on August 31, 2020, and will be missed by legions of residents and tourists who enjoyed its vibrant atmosphere over the decades. The proposed Harry Potter amusement park, however, is sure to excite and intrigue the millions of Harry Potter fans in Japan and elsewhere in Asia. The extremely popular The Wizarding World of Harry Potter ride in Osaka's Universal Studios Japan has been an accurate indicator of the popularity of the Harry Potter character and the proposed Tokyo-based theme park is sure to be a massive hit.

Toshimaen is located in front of Toshimaen Station located on the Seibu Ikebukuro Line.

A family-friendly theme park in Nerima, Toshimaen Amusement Park is home to over 30 rides, including the world's oldest amusement..

Toshimaen Amusement Park is home to a dreadful place where ghosts and demons wander with the only purpose of scaring naive visitors...

It is very difficult for foreigners to rent an apartment in Japan, mostly due to language barrier and lack of guarantor. The rental..

Nakano Broadway is a shopping mall in Nakano, Tokyo, Japan. Founded in 1966 as a luxury shopping complex, it has subsequently become a popular destination..

Asagaya Shinmeigu Shrine (阿佐ヶ谷神明宮) is a real gem of a shrine just a few minutes walk from the north exit of JR Asagaya Station. It's also..

A few seconds walk from JR Asagaya visitors will stumble across Star Road, a maze of small bars and cafes which has been serving the good folk of Asagaya..