Italian cuisine is popular all around the world and restaurants can be found pretty much anywhere, but whether their cuisine is authentic is always something people wonder about. Japan has its fair share of restaurants all around the country as well, and throughout the month of November, several Japanese chefs went head-to-head to prove their cuisine is the real deal. On the 25th of the month, the final round of the 10th edition of the Authentic Italian Competition—Gran Concorso di Cucina—organized by the Italian Chamber of Commerce in Japan was held at the Chu-bo Shiodome Showroom.

After two hours of intense cooking, the event saw Chef Masaki Ohnuki from the Flattoria Restaurant come out on top of this year’s edition, thanks to his preparation of tonnarelli with southern-squid butter sauce.

Eight finalists from around Japan selected from among the initial 80 non-Italian chefs in the country faced each other for the title with this year’s theme revolving around pasta.

This year’s contest took place during the International Week of Italian Cuisine (Settimana della cucina italiana nel mondo) and in partnership with the event, which allowed both the Italian Embassy and the Italian Cuisine Academy to be represented in the judges’ seats. They were further accompanied by renowned chefs from Japan and Vito Mollica—chef and director at the renowned Palagio of the Four Seasons Hotel in Florence, Italy—who landed on the very same day to take part in the event.

The rules of the competition were simple: the chefs would go in two groups of four with each group having exactly one hour to prepare their dish and impress the audience with the available ingredients and tools. A great selection of ingredients was available, from the classic Italian olive oils to ingredients that would not be found in traditional Italian cuisine such as yuzu (a citrus fruit commonly used in Japanese cuisine that is believed to have originated from Central China), and of course the main ingredient for the day: pasta.

During previous editions of the contest, chefs would have the opportunity to prepare several dishes and be judged on all of them, but this year they had only one chance to impress with their dish, increasing the difficulty and the pressure on their preparation.

Three large island counters filled with cooking tools were available to the contestants in the kitchen. This offered plenty of space for the audience to fully enjoy the preparation process from all angles.

The chefs started delivering dishes after 40 minutes, allowing the audience to taste a little bit. Some dishes were typical Italian ones and any Italian person would recognize a similar taste from home, while others were a bit more surprising. Those that used typically Japanese ingredients to make the dish unique took a high risk in doing so. A dish that used yuzu juice comes to mind straight away. It was great but felt like a completely different dish than the original one.

The eight finalists were introduced to the audience early on, all being chefs in renowned Italian restaurants around Japan, including the 2016 edition champion:

French & Italian living in Japan, I have been traveling to Japan every year until I moved to the Shonan area in late 2018. Coffee lover, I spend most of my free time looking for the best cafes the area has to offer. 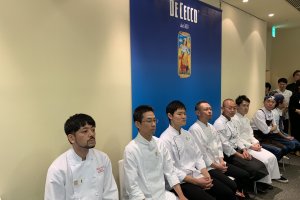 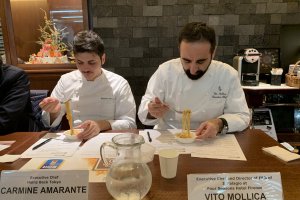 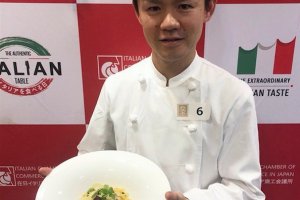 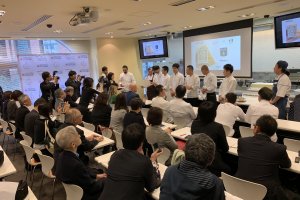 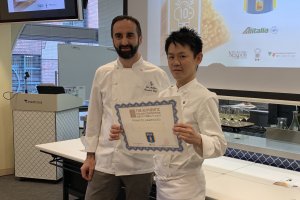