The artistic legacies of Hokusai and Hiroshige

Ukiyo-e woodblock prints have carved themselves into the consciousness as one of Japan's iconic representative arts.

Established and then flourishing during the Edo Period, the ukiyo-e form inspired many artists. The works of Hishikawa Moronobu with his mastery of line, Torii Kiyonaga who focused on female beauty and the enigmatic Sharaku, whose mysteriously short career and identity added to the appeal of his kabuki actor portraits, live on to this day.

But of all the masters of the craft, perhaps none have had as great an international appeal as Katsushika Hokusai and Utagawa Hiroshige.

Most famous for his Thirty-six Views of Mt. Fuji, Hokusai represented an almost anti-establishment approach to his art. His works moved ukiyo-e from classic portraits of kabuki actors and courtesans to the much broader world of nature. With bold images, Hokusai's stylised manipulation of his subject always pushed the boundaries of his own understanding. On his death bed, Hokusai was reported to have said, "If only Heaven will give me just another ten years, just another five more years. Then I could become a real painter."

On the other hand, Hiroshige, perhaps best exemplified by his The Fifty-Three Stations of the Tokaido, sought a more gentle and ephemeral sense to his art. Though inspired by Hokusai, Hiroshige relied more on space, ambience and natural observation to bring his works to life. Known for his images of famous places, the power and impressiveness of his works seem tinged with a sense of the humility of the human scale. His death poem, reiterating his desire to see the famous places in the world beyond, only reinforces that.

With their influence on ukiyo-e real and lasting, it is hard to say whether or not these two masters will ever be surpassed. But if not, then admirers of their creations can at least find inspiration in the museums and galleries dedicated to their art. 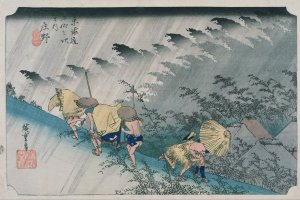 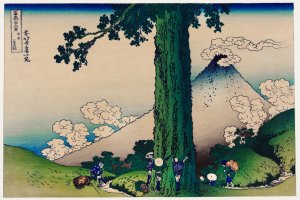