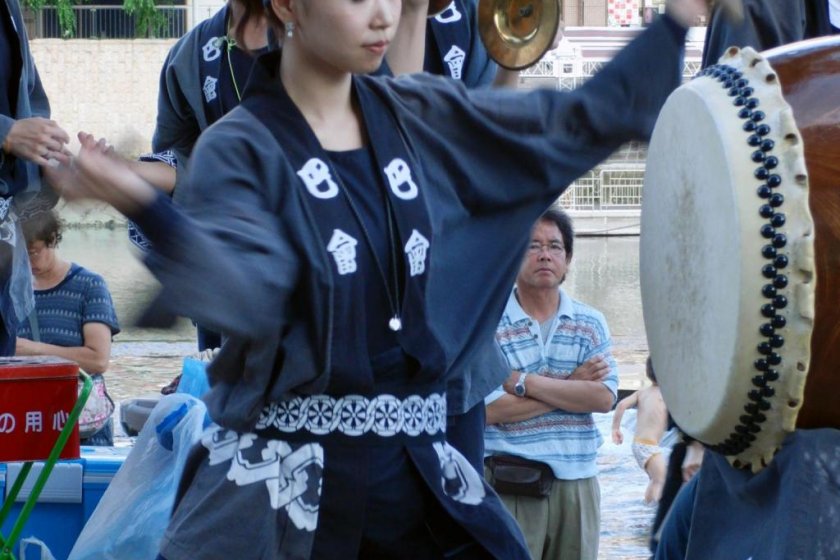 Caught up in a frenzy of drumming

The Kokura Gion festival is a frenzy of mid-summer community drumming in northern Kyushu and is held annually over three days from the third Friday through Sunday of July.

In the middle of July, I took the night ferry from Matsuyama to Kokura, a district in the city of Kitakyushu. When I planned my trip, I wasn’t aware that I’d be landing slap bang in the middle of a major taiko drum festival.

In fact, it wasn’t until the afternoon that I became aware of this. I’d spent a very pleasant morning in Mojiko and was making my way back into Kokura when I came upon some men in a car park wearing festival clothes. They were standing around a decorated wagon with drums on it. This was the first hint that something was afoot. Since the men looked fairly exhausted, I asked one of them if they were packing up after a festival. No, he assured me, they were getting ready for the last night. Shortly after, I became aware of a general throbbing of drums from the direction of Kokura Castle where I was heading.

As I was eating a late lunch of ramen, what should pass by the window but a marching band of the brave armed forces of Japan, led by a troupe of pretty girls in yukata. The band were great. They were playing Japanese pop hits with a swaggering marching tempo. I dashed out of the ramen shop to follow them just as they broke into a traditional English number that I recognized. The band headed on towards Kokura castle which sits in a large, grassy park. There, laid out around the perimeter and along each path were row upon row of stalls selling tasty snack food and children’s toys that break after 24 hours.

Everywhere there were festival juggernauts with drums on them, being pulled this way and that. There were some within the castle walls too, sitting in front of the shrine. The shrine itself was packed with people who were watching a traditional drama with heroes clad in bright kimono and ferocious masks, sword-fighting in slow motion to the sound of drum and flute. I took a seat near one of the industrial-strength fans that were set up to cool the audience, and watched until the end of the show. I had time to enter the castle and enjoy the spectacle of the festival from high above.

As evening fell, groups of drummers assembled, setting up a couple of taiko drums on simple stands. Each group, men, women and children, represented a single city community. They were dressed in identical leggings, jikatabi, and a happi coat with local crest. They all began drumming, with the rhythm set by someone playing tiny, piercing cymbals. As the evening wears on, something of a frenzy takes hold, and the drummers take turns on each side of the drum, switching places with a flourish. The sound is hypnotic, not because the drumming is monotonous but because there are so many variations – the people of Kokura collectively have a huge repertoire of rhythms.

Forgive me if I wax a bit lyrical here, but I found it moving to witness community solidarity in the form of mass cultural participation and creation. There was also a group of foreigners from all over the world putting on a very creditable performance. The atmosphere was nothing if not inclusive.

The drumming continued after dark. As I wandered the streets I came across a small urban park where one of the groups was sitting quietly under a tree in the dark drinking beer, with their drum wagon parked on the street. It seemed a perfect expression of local community.

Find out more about Kokura Castle. 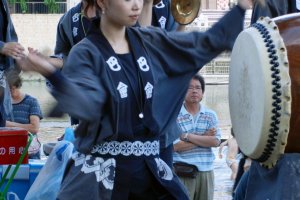 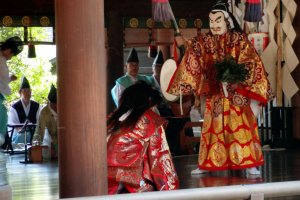 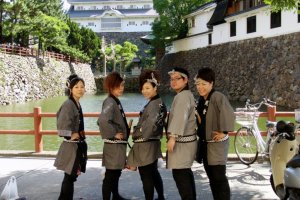 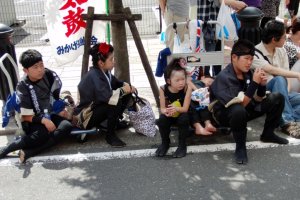 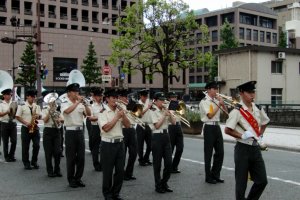 Sleiman Azizi 3 years ago
Another case of a memorable moment coming about by chance.
Reply Show all 0 replies

Justin Dart 10 years ago
Excellent! As a Taiko and regular drummer, I must get to this event. Another reason to visit Kyushu.
Reply Show all 0 replies
2 comments in total