Popular with families, the bedroom community that is Kokubunji City is home to many temples and shrines. While most are local by temperament, the city does have one particularly outstanding temple with a rich and celebrated history. Here is an introduction to some of the temples and shrines of Kokubunji and how to reach them.

A striking colour design of red and white with green roofing is the most obvious feature of Honda Hachiman Shrine. Another is the 100 kilogram power stone that dates back to the mid-19th century. The grounds come alive each year in mid-September when a festival is held here to honour the shrine's dei

A 10-minute walk from Kokubunji Station on the JR Chuo Line.

Established in the 8th century by Emperor Shomu, the original structure Musashi Kokubunji Temple is long gone but its grounds are replete with historical details. These include a fantastic two-storied sanmon gate and a small copper statue dating back to the 8th century and now registered as a Tangible Cultural Property.

A 15-minute walk from Kokubunji Station on the JR Chuo Line.

Originally established in the early 18th century, Tokura Shrine was renamed as such later in the mid-19th century. With some unexpected details like a kaguraden ceremonial platform and a pair of exceptionally sculpted komainu guardian statues, the shrines hosts a number of festivals throughout the year.

A 13-minute walk from Koigakubo Station on the Seibu Kokubunji Line.

Said to have been established in the late 12th century, Yakushido Temple is a lovely piece of landscaping and design. A bell tower, niomon guardian gates along with plenty of greenery - including that classical component of traditional garden design, moss - add that classical touch to what is a lovely location.

A 12-minute walk from Nishi-Kokubunji Station on the JR Chuo or Musashino lines. 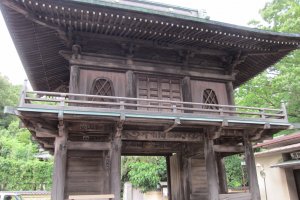