The Asahikawa Winter Festival is a large scale winter festival in Hokkaido, occurring around the same time as Sapporo’s Snow Festival. It has one of the biggest snow sculptures, as well as one made especially as a stage for music and performances.

The sculpture varies each year, with different themes. I had the opportunity to meet Yosuke, who spent 40 hours carving a 3 meter high ice sculpture. While the rest of the city sleeps, its sounds muffled by snow, Yosuke takes his chainsaw, and transformed a ice block to a giant crystal like dragon, a shining icon to hope and adventure. The snowy breath of its creator and the sound of ice cutting piercing the silence. Actually he is in a race to finish this before the festival competition starts. While the sculpture will melt away, the work is all worth it, and this is the spirit of the Winter Festival.

Besides the iconic displays, there are several other smaller snow sculptures such as snow slides, snowmobile rides, horse drawn sleigh rides and an ice bar. The festival officially begins and ends with fireworks. There are two sites, the giant snow sculpture located at the riverside Asahi-bashi. The second site is along the Heiwa Dori pedestrian streets, with around 50 ice sculptures displayed for competition. At night, the ice sculptures are illuminated by lights, looking even more spectacular.

Asahikawa can be reached by direct flights from Tokyo and Taipei, while holders of a Japan Rail Pass can make unlimited trips to Asahikawa within a 7, 14, or 21 day basis. 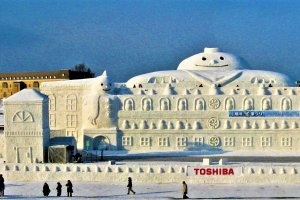 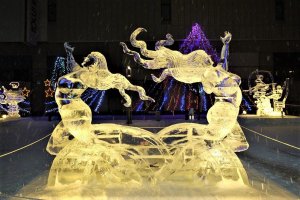 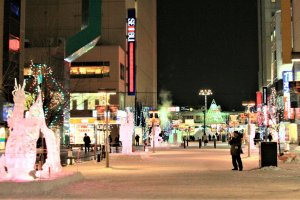 63rd Asahikawa winter festival has decided to stop holding the event as a attracting event and implement initiatives centered on online.

Preethu 5 years ago
Thanks for the info.
Reply Show all 0 replies
2 comments in total