The Posters of Ikko Tanaka

An exhibition by one of Japan's design masters

Ikko Tanaka is one of Japan's most prominent graphic designers and a leading influence on the country's contemporary design industry. He fused Japanese tradition and a global style, and was especially well-known for his poster and publication designs. In a first for Osaka, 50 of his posters are on exhibit at The National Museum of Art. This is the first time such a large collection of his work will be seen in the city. The exhibition will run from April 5 to June 19, 2016.

Tanaka was born in Nara, Japan, and studied art as a child. He began working in post-war Japan, in the late 1950s, a time when Japanese designers were trying to balance their creative past with modern tastes and sensibilities. In 1963, he established his own design studio in Tokyo. By the 1970s, he was one of the leading figures in the commercial art world.

Tanaka successfully married past and present in strong graphic compositions that distilled Japanese culture in very contemporary ways, often using simple and colourful geometric shapes. Clean and strong, his designs are deceptively simple but incredibly impactful. Among his clients are Issey Miyake and Mazda. Tanaka had a close friendship with Miyake, working on his advertising campaigns. In a tribute to the late designer, Issey Miyake's latest collection features Tanaka's bold graphic designs on his clothes.

Much sought after for public campaigns, Tanaka created the logo, medal motif and posters for the 1964 Tokyo Olympics. One of his most famous work is for the dance troupe Nihon Buyo Performace, where with just a few simple geometric forms he rendered an abstract version of a geisha. Another striking work is his 1958 poster "The 5th Sankei Kanze Noh" where with a few brushstrokes, he created an image of a geisha, backdropped by coloured blocks.

You can view all these works and more at the exhibition. The bare, black walls of the gallery further amplify the bright and colourful posters, to good effect. Tanaka's work is quintessentially Japanese but with global appeal, and this exhibition in Osaka is a great occasion to appreciate his work. 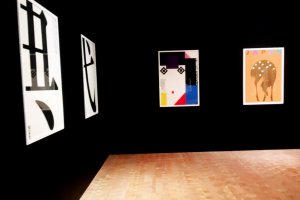 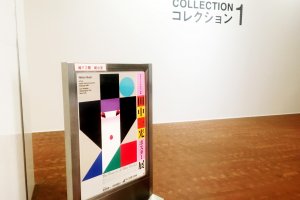 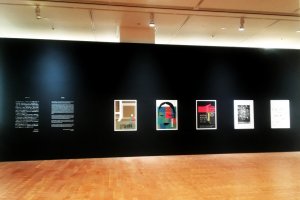