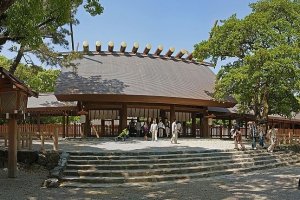 Atsuta Jingu (Atsuta Shrine), also known as Atsuta Sama (Venerable Atsuta) or Miya (the Sanctuary), has been one of the most significant centers of worship in Japan since ancient times. Visitors to the shrine, including those who conventionally visit the New Year practice count up to nine million annually.

The revered deity of the shrine is Amaterasu-Oomikami, represented by the holy sword Kusanagi-no-tsurugi, one of the three sacred treasures that symbolize the imperial throne.

Tradition has it that this mighty God, through the divine decree of the Creator God Amatsu-mioya-no-Mikoto (God of the Heavenly Father), entered the world for the first time on the path of the gods and blessed humanity with the virtue of love.

Atsuta Shrine and the Legendary Sword

Ranking second only to the Great Shrine of Ise, Atsuta Shrine in Nagoya City dates back 2,000 years, and houses the sacred sword,..

Atsuta Shrine in Nagoya – where history and myth come wrapped in a blanket of peace and tranquility.

Atsuta Jingu Shrine in Nagoya is a holy haven of nature as well as a sacred sanctuary of Shinto belief.

If you’re looking for an accommodation with modern facilities, easy walking distance to Subway stations, right next to the cit..

Hotel 'the b nagoya'

I would be happy to stay at the 'hotel b nagoya' again. Just like the best waiters are the ones you don’t notice, the ..

Osu shopping district has a vast array of food, so filling up one's stomach was definitely unavoidable. Not only there was a..

Putting a Spin on the World's Bes...

Where's the world’s BEST pizza? Italy? New York? Melbourne, Australia? No, Nagoya! & Cesari has the papers to prove it.

The temple Kitanosan Shinpuku-ji Hosho-in in Nagoya, Aichi, is commonly known as Osu Kannon. The temple was originally built in 1333 in Gifu Prefecture,..