Atsuta Jingu derives much of its grandeur and impact from its history and the dramatic simplicity of its shrines. The finishing touch has to be the majesty of the vast, sprawling, arboreal surroundings.

The shrine is enclosed by a walk-around dense path of cedar groves, copses of camphor, zelkova, oak, beech, gingko, and camellia in bloom, with red flowers strewn across the path. Cawing crows, big and black, blended in, as did the groups of people continually moving through. You actually don’t hear them. It’s the kind of surroundings in which you can easily lose your mind. Views of several small shrines through the thick foliage add mystique.

These forests and everything living in them are left untouched, in accordance with the key Shinto tenet that natural surroundings and living beings (including us, too) are dwellings for deities and spirits. Atsuta Jingu is the avenue to communicate with them, so that nature, worshipers, shrine, and deities are sealed together into a unified and complete entity.

Everyone bows on entering and leaving through the torii gates, even though from that distance the shrines are not seen. We’re acknowledging that the forests around us are sacred ground and a powerful holy force unto themselves.

Atsuta Jingu’s fame as an extremely holy sanctuary, drawing nine million visitors a year, comes from its primary association with the most sacred Shinto sun goddess Amaterasu, originator of the Imperial Family lineage. She is believed to abide here together with a Sacred Sword. This Sword represents the authority of the Imperial Family. Nobody alive has ever seen it. Thus the Main Shrine is hidden away by at least two other shrines, and high walls. You only get to see the tops of the roofs. And the shut door.

Pride of place at Atsuta is a truly splendid ookusu, which literally means “big camphor tree”, and is unmissable at the entrance to the main shrine. All of 1,300 years old, Kobo Daishi, one of the great Buddhist monks, supposedly planted it. Less plausible is that white snakes live inside the tree. It’s your lucky (?) day if they slither out to meet you. Maybe not today. I came across another ookusu in my walk around. There are two of them!

Just a little detour off the forested path, I spotted people throwing water and praying at a little black rock that was set in the stream.

Evidence of the Shrine’s prestigious history is in the blocks of eight feet tall, layered walls built in 1560 by Nobunaga Oda, a fiery feudal warlord. He, Toyotomi Hideyoshi, and the Tokugawa Clan, were also valued supporters of the shrine.

Faith in the shrine was demonstrated by the queues to offer up wooden prayer cards and get fortune slips of paper. All over you could see, hanging or strung up, the hopes and dreams of the faithful.

Atsuta as a holy haven of nature complements the heavily industrialized business center of Nagoya, with its spectacular architectural splendor of dizzying, sky-high glass towers and buildings. Both their histories start about the same time in 1610. The shrine is also the protector of agriculture, the agricultural industry, and business success, and the shrine was teeming with business men the day I was there.

Take Meitetsu Line from Nagoya Station to Jingumae Station (Y230 for a one way ticket). The shrine is a five minute walk from the station. There are signs at the station.

Meitetsu Line is situated outside JR Nagoya, where Takashimaya and the Marriot Associa Hotel are. This is the side with Nagoya’s architectural splendors.

Find out more about Atsuta Shrine. 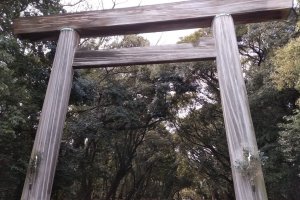 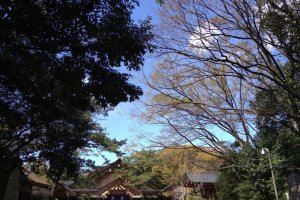 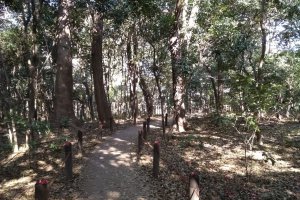 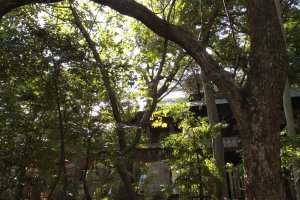 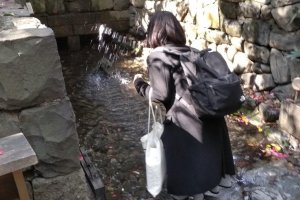 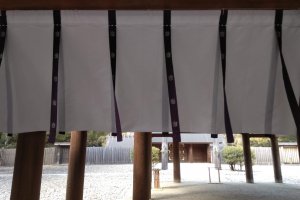 Sleiman Azizi 2 years ago
The simple look of the torii entrance says it all.
Reply Show all 0 replies
1 comment in total