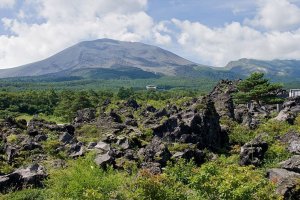 Mount Asama, on the border between Gunma and Nagano, is one of the most active volcanoes in Japan. Onioshidashi Volcano Park is characterized by volcanic sediments that were deposited here during the great eruption of the mountain in 1783. The great diversity of alpine wildlife in front of the volcanic landscape offers some truly spectacular sights, black rocks formed by hardened lava criss-crossing the landscape.

There are even rare species of plants that thrive all year round. Luminous moss is one such species that can be seen in spring and autumn. The park is one of the few places in the world where it grows. In the middle of the park is a temple dedicated to the Buddhist goddess of mercy Kannon.

Not far from the park is the Asama Volcano Museum, where visitors can learn about the geography of the volcanoes and the flora and fauna on volcanic terrain.

A 35-minute bus ride from Karuizawa Station to Onioshidashi Park.

Near Karuizawa resort on the border of Japan's Gunma and Nagano prefectures, Onioshidashi park offers the best view of Mount..

Near the resort of Karuizawa in Japan's Nagano prefecture, Onioshidashi is a fascinatingly strange, rugged landscape, formed..

Futuristic, massive and lunar in landscape. These were my first impressions of Mount Asama, one of Japan’s most active volcano..

Has your child ever wondered what it’d be like if they gathered all the toys they ever wanted into the same room? Then Kingdom..

Near Karuizawa resort in Japan's Nagano prefecture, Shiraito-no-Taki Waterfall is a great example of beautiful landscape and..

Near Karuizawa in Japan's Nagano prefecture, Shiraito Falls is a strikingly beautiful waterfall, with groundwater flowing down..