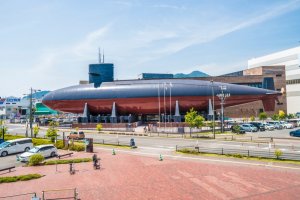 The Yamato Museum is the nickname of the Kure Maritime Museum in Kure, Hiroshima. The Kure Naval Base was established in 1889 and the Kure Naval Shipyard opened in 1903. The famous battleship Yamato was also built here.

After World War II, technologies that were cultivated in the pre-war era were combined with later developments, resulting in Kure becoming one of the leading cities in the naval industry. Kure was also a place where many of the largest tankers in the world were built.

A 1:10 scale model of the battleship "Yamato" is exhibited inside the museum. It has been duplicated as closely as possible based on original drawings, photos and underwater images made through underwater surveys.

Yamato, the biggest battleship ever built, was sunk by American aircraft during the suicide operation Ten-Go. Kure's Maritime..

The Kure Fireworks Festival takes place every August by the city port. Spectators here will enjoy an hour of pyrotechnics over the..

Kaigun-san no Mugishu-kan is a restaurant near the Yamato museum serving excellent beer brewed locally.