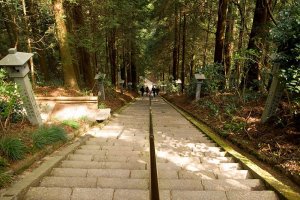 Daiyuzan Saijoji is a temple with a deep connection to the tengu, those creatures who occupy a special place in Japanese folk religion. For example, folklore has it that the tengu, in a variety of different ways, supported the Zen priest who first built Saijoji TempleThe Daiyuzan Saijoji Temple in Minamiashigara is a breathtaking temple of Soto Zen Buddhism. The temple grounds, which were built more than 620 years ago, contain around 30 ceremonial halls and other temple buildings. The temple is surrounded by an impressive cedar forest.

In the temple the novices receive their formal religious training to become monks. There are 3 impressive halls on the temple grounds that are worth visiting: the Hondo, Kaisando and Myogaku halls.

The temple has a deep connection to the mythical creatures of the Tengu, those creatures that have a special place in Japanese folk religion. For example, it is said in folklore that the Tengu supported the Zen priest who built the Daiyuzan Saijoji Temple in various ways.

Daiyuzan Saijoji Temple in Kanagawa is one of the most inspiring temple grounds I've been to. Tucked away in a lush forest,..

Saijoji is an amazing Zen temple hidden among giant cedars in the forest of Minami Ashigara City, southern Kanagawa Prefecture.

Imagine an ancient forest, with huge trees covered in shiny green moss and only the sound of the raindrops falling on the wooden..

Daiyuzan Saijoji Temple is a complex of temple buildings, statues and waterfalls, all nestled into a beautiful forest full of ..

Hydrangea Retreat at the Hotel In...

During hydrangea season for 2021, the Hotel Indigo Hakone Gora is offering a hydrangea-themed retreat for guests.

Nestled in the lush gardens of Miyanoshita, Fujiya Hotel will intrigue every sense of your well being from the moment you lay your..

If ‘nostalgic’, ‘classic’, and ‘classy’ are high on your list, then the Fujiya Hotel in Hakone is going to please you immensely.

How Sake is Made

As sake is made from rice, local rice producers are finding a new acquirer. Therefore the brewery is actively increasing the local..

Lunch and Drinks at Pan-no-Mimi

Your tastebuds will be delighted with the variety of restaurants available at Fujiya Hotel: The Fujiya (French cuisine), Wisteria..

Be awed by storm clouds of volcanic steam that gather over the active volcano, Owakudani (大涌谷), the Great Boiling Valley. Created around 3,000 ye..

Odawara Castle was built in the 15th century by Daimyo Hojo Soun. It was demolished by the Meji government in the 19th century. It was rebuilt in 1960..