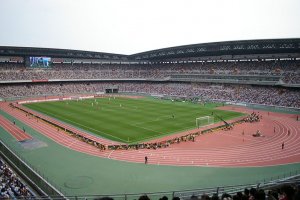 The Yokohama International Stadium, also known as Nissan Stadium, is one of the largest stadiums in Japan with a capacity of around 70,000 seats. The sports facility, which opened in 1998, is used for soccer, athletics, rugby, American football, and cultural and entertainment events The roof structure covers three quarters of the seats.

The stadium is usually home to the Yokohama F Marinos, Nissan Motor's corporate team, and is also the home venue for Yokohama FC football matches.

In autumn 2019, however, the International Stadium Yokohama showed the rugby skills of teams from New Zealand, South Africa, Ireland, Scotland, England, France and of course Japan for several weeks. The final of the World Cup was played here on November 2nd.

Social Residence Tama Plaza is a share house located in Shinishikawa, Aoba Ward in Kanagawa Prefecture. It is an 8-minute walk from Tama-Plaza Station,..

The Royal Park Hotel is located on the upper of The Landmark Rower. Staying here will be an unforgettable memory of your travels..

The Shin-Yokohama Ramen Museum combines museum with foodcourt with ramen to create an educational and filling event. The museum opened in 1994 and is..

At Rallentare, you can enjoy the finest local ingredients prepared beautifully for your enjoyment. All of their dishes are prepared without the use of..

Enjoy meticulously prepared sushi at Matsumoto, best accompanied by their fine selection of sake. Although none of the staff speak English, you'll..

Asobuild is an interactive indoor entertainment facility that has a lot to offer visitors of all ages. Asobuild is directly connected to Yokohama Station. The..

Rinko Park (臨港パーク) is a large green space on the eastern side of Minato Mirai, along the shore of Yokohama Bay and overlooking the Port of Yoko..

The Yokohama Museum of Art was founded in 1989 and is one of the largest museums in Japan. The facility contains a total of seven galleries: 3 for permanent..