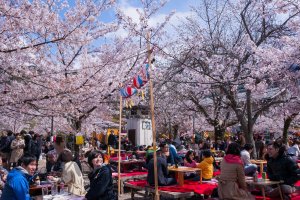 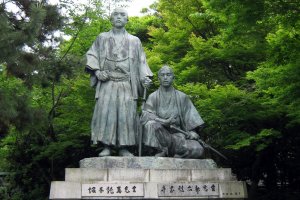 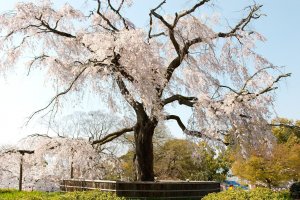 Maruyama Park is the oldest public park in Kyoto and a popular springtime cherry blossom viewing spot. It opened in 1886 and is located next to Yasaka Shrine in Higashiyama District.

The park was laid out by the well-known gardening expert Ogawa Jibee (1860–1933). As it is one of the most popular places for hanami in Kyoto, it can get quite crowded during the high season in April. The main attraction of the park is a beautiful weeping cherry that is illuminated at night.

In the southwest of the park is the Chorakukan Villa, which the Japanese tobacco king Murai Kichibee had built. This property is now used as a hotel.

These two famed rogues fought against the Bakufu and Shinsengumi during the Bakumatsu period. Their likeness stands in the park now, cast in bronze.

Red maple leaves around the pond in Maruyama Park make it an attractive place to enjoy autumn color in Kyoto.

Chionin Wajun-kaikun is in a peaceful area of Kyoto where you can find rest and relaxation for your body and mind.

Comfortable hotel with spa bath in a room and free breakfast, in the center of Kyoto.

Trattoria Minoura is a small restaurant near Kodai-ji Temple and Yasaka Jinja Shrine. Their weekday lunch set (1500 yen) is qu..

In Japan's former capital of Kyoto, Mimikou udon is a small, inexpensive noodle shop, with a good range of tasty, filling dishes...

The Yasaka Cry, located in the Gion district in Kyoto, is often referred to as the Gion Shrine. The shrine is one of the most famous shrines in the city..

Kennin-ji is a historic Zen Buddhist temple in Higashiyama, Kyoto, Japan, near Gion, at the end of Hanami Lane. It is considered to be one of the so-called..