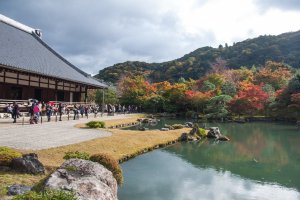 Tenryu-ji (天龍寺) is the head temple of the Tenryuji sect of Rinzai Zen Buddhism and was first established by shogun Ashikage Takauji in 1339 to honor Emperor Go-Daigo. After its construction, it was deemed to be the most important Zen temple among Kyoto's Five Mountains (five major Zen temples). In 1994, Tenryu-ji achieved UNESCO recognition as a World Heritage Site.

Situated in Arashiyama, the temple is famed for its picture-perfect view of the Zen garden during peak fall foliage. The exquisite landscape garden was curated by famed designer Muso Soseki and has survived years of civil wars and accidental fires, remaining its in original form. Tenryuji's buildings were damaged by multiple fires throughout the years and was only able to be rebuilt with the help of shogun Toyotomi Hideyoshi during the 1500s. However, only around 10% of the original temple grounds remain in present time.

Tenryuji, the Temple Of the Heavenly Dragon, is a UNESCO World Heritage Site in the Arashiyama/Sagano district of Kyoto. It is the..

Tenryu-ji Temple: Like most places in Kyoto this time of year, the Japanese Maples were in full bloom and proud as a peacock. Everyone..

One of the attractions in Arashiyama is Tenryu-ji Temple and it is listed as a UNESCO World Heritage. In summer, you will see the..

Tenryu-ji temple in Kyoto, an aspicious beginning to spring. Enjoy depth of color and texture on the temple grounds. Sakura blossoms,..

Tenryu-ji Temple and the nearby Sagano Bamboo Grove are justly famous for their year-round beauty.

In Kyoto's Arashiyama, the landscape of cherry blossoms and autumn leaves are very special, although this district attract..

Sagano is a peaceful strolling district in Kyoto

The Splendor of Houka East and West

Finding a great place to stay in any city is always a challenge. But nestled on a quiet street a brief walk from Kyoto Station,..

More like a chic home stay from an interior decoration magazine, this guesthouse is both elegant and comfortable.

Zen Buddhist Cuisine at Kyoto's Tenryu-ji temple is certainly a culinary adventure and definitely worth being put on the ‘..

Shojin-ryori zen buddhist vegetarian cuisine at Tenryuji temple in Arashiyama, Kyoto is served to you by monks in a stunning picturesque..

At Saga Tofu Ine in Arashiyama, yuba and tofu are served in many different ways. Some dishes are roasted, some are boiled, and some..

Known as the “Moss Temple” or Kokedera Temple, Saiho-ji in Kyoto is home to one of Japan’s finest moss gardens. Built in 1339, the Zen temple was..

Established in 888, Ninna-ji is a temple of great importance — being the head temple of the Omuro school in the Shingon sect of Japanese Buddhism. Ninna-ji..