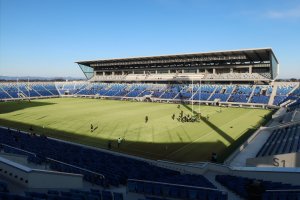 Kumagaya Rugby Stadium, built in 1991, is very popular with Japanese rugby fans as it is one of the few stadiums in the country that was built exclusively for rugby. The stadium was completely renovated ahead of the 2019 Rugby World Cup, making it a world-class international rugby venue.

The recent changes to the stadium seating give spectators an even better view of the game. The stadium's capacity was expanded from 20,000 (10,000 seats) to 24,000 people (full seating).

It is the main rugby stadium in Saitama Prefecture and is the home of the top league club Panasonic Wild Knights. It is also used for university league games and sometimes other top league games.

Why not review more places in Saitama?

Vert Cafe is located in the former Oshimachi Credit Association, a tangible Cultural Property of Gyoda City. A beautiful wooden..

Surrounded by mountains, bordered by rivers and blessed with space, Kumagaya (熊谷市, Kumagaya-shi) is a hidden jewel of Japan.

The Uchiwa Matsuri is the largest annual festival in the Kanto region with over 750,000 people attending over its three days in..