A taste of humble Saitama

Head one hour north from Tokyo and you'll come across the gateway to Saitama Prefecture, Kumagaya. A former trading stop on the old Nakasendo Highway, Kumagaya City retains its historical transport tradition by being the regional hub for Saitama and much of northern Japan.

Birthplace of the fabled warrior-come monk, Kumagae Naozone whose emotional tale of regret and penance has been immortalised in the moving Noh play, Atsumori, Kumagaya is also famous for its extravagant three-day Uchiwa Festival and kaleidoscopically detailed Menuma Shodenzan Kangiin Temple, the prefecture's first National Treasure.

Kumagaya's rich history belies the humble nature of its local cuisine. Perhaps Kumagae's sombre penance lives on in the food as the ever rustic offering of udon noodles turns out to be Kumagaya's main go-to cuisine. Sourced from wheat grown in the area, Kumagaya udon is rich in flavour and heart, representing regional pride and a much respected resource.

The signature dish of the Menuma Shodenzan Kangiin Temple is another low key cuisine, inari sushi. These deep-fried tofu bags of vinegared rice and picked vegetables are in keeping with with Buddhism's non-meat philosophy and reflect the piousness of the temple's original benefactor, Lord Sanemori.

Far removed from the piety of temple fare is the equally humble but completely carnivorous Kumagaya speciality, horumon, or tripe. Grilled over charcoal, the internal organs of beef or pork are an extremely delicious evening food, particularly at bars and street stalls where its saltiness goes hand-in-hand with a drink or two.

Kumagaya's sweet tooth can be found in its famous gokabo. Made from techniques originating in the Edo Period, gokabo are sweetened rice cake rolls coated in roasted soybean powder. Delightfully rustic and rural, they have become the city's go to souvenir sweet.

Local food here in Kumagaya balances out the city's extravagant festivals by remaining loyal to the area's local knowledge and humble tastes and is well worth the experience. 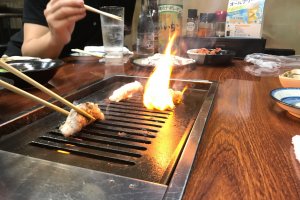 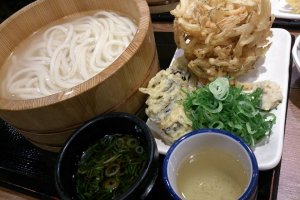 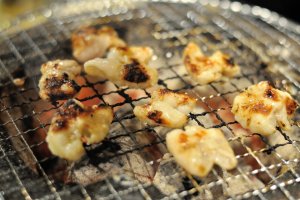 Elena Lisina 2 years ago
I like to try different dishes and like almost all in Japan, with little exception.
Reply Show all 0 replies

Kim 2 years ago
Ah! Kumagaya is one of the stops on the Joetsu Shinkansen when I go from here in Niigata to Tokyo or vice-versa. Always find myself wondering what there is to do at the stops along the way - now I know it's a bit of a foodie paradise!
Reply Show all 1 replies

Sleiman Azizi Author 2 years ago
I think the same thing at pretty much every stop, local or bullet train, lol.
Reply
3 comments in total