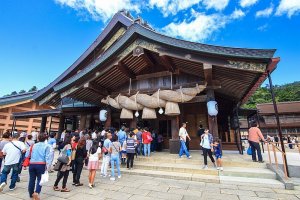 The Great Shrine of Izumo Taisha, also known by its official name, Izumo Oyashiro, is located in the city of Izumo on the western edge of the Shimane Peninsula. As one of the most famous and important shrines in the country, Izumo Taisha is celebrated by many people each year, both visited from Japan as well as from abroad.

Although it is not possible to pinpoint the exact date of its creation, many people in Japan believe that this shrine is the oldest Shinto shrine in the country. The main building of the shrine was built in the Taisha style, which is considered to be the oldest architectural style for shrine buildings.

Numerous festivals are held every year at the Izumo Taisha. One of the most important of these is the Imperial Festival on May 14th, followed immediately by the great festival on May 14th and 15th, and many people visit the shrine to pray for a happy life.

The stunningly beautiful Izumo Taisha Grand Shrine in Shimane Prefecture is one of the oldest shrine sites in Japan.

Why not review more places in Shimane?

En-musubi in the Izumo Region

Izumo Taisha, or Izumo Grand Shrine, is one of the most famous and most significant Shinto shrines in Japan. Though the date of..

Exploring Izumo on two wheels is easy, with bicycles available for rent from Izumo Taisha Mae station for a small fee. One of the..

The Hinomisaki Lighthouse in Izumo is one of the more unique spots in all of Shimane. This massive white structure towers in stark..