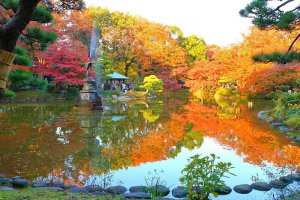 This large green space just outside the walls of the Imperial Palace is the oldest western-style park in Japan. Opened to the public in 1903, the park sits on the grounds of former daimyo (feudal lord) estates. Today, the park is known for its seasonal flower displays and quiet walking paths, making it a relaxing escape in a bustling business district.

The nearly 40-acre park is home to several historic sites. At the north end of the park, the stone walls of the old Edo Castle moat and one of the fortification’s guardhouses stand hidden amongst the greenery. Nearby, a decorative horse fountain hearkens back to a time before the automobile rolled down Tokyo’s streets. On the southern end of the park, the blocky Gothic-style Shisei Kaikan served as the Japan State News Agency during World War II.

The large fountain in the center of the grounds is one of the park’s most popular features and is often illuminated in the evening. Nearby is a traditional Japanese garden, known for its autumn foliage displays and a fountain in its pond in the shape of a crane (the national symbol of Japan). Just beyond that, an open-air concert venue makes for a popular summertime destination. In the northwestern corner lie some of the most coveted tennis courts in the city. Reservations are nearly impossible to come by.

Hibiya Park is also home to some of the first Western-style gardens in Japan and still remains a popular destination for seasonal flower displays. November sees around 2000 chrysanthemums on display, a tradition that began over a century ago. There are also large tulip and rose gardens and a morning glory market in early July.

While Hibiya Park is graced with many leafy trees, one, in particular, has long attracted attention. Known as the “risky ginkgo”, this 400-500-year-old tree was due to be cut down to make way for a road-widening project in 1901. The park designer, Seiroku Honda, resisted, and under his guidance, the ginkgo was instead uprooted and moved a half kilometer further into the park. Remarkably, the tree survived.

Hibiya Park hosts a number of festivals on its grounds throughout the year, from a summer Bon festival to the Fishermen’s Festival in November.

Hibiya park in Tokyo covers an area of 161,636.66m2 between the east gardens of the Imperial Palace to the north, and the Shimbashi..

Hibiya Park is the perfect escape from the noise and the crowds when traversing Tokyo. The park was once home to a feudal lord..

Marunouchi Ondo festival is held at the fountain in Hibiya Park. Starting in 2003, this festival is by far the biggest held in Tokyo..

A two-day farm food festival for children in Hibiya Park, Tokyo. Held on the 10th and 11th of November, the festival aims to teach..

The Tokyo Christmas Market in Hibiya is one of the most extravagant ones in Japan.

Participants at the Tokyo International Charity Marathon 2020 can be sure to feel they are running for a great cause. Organize..

The new Ginza Sony Park will refresh the Ginza area by bringing a splash of color and life to this city district. The park project includes two phases..

Tokyo International Forum is a multipurpose Tokyo exhibition center located in the central Marunouchi district of Tokyo. It is a convention and arts center..