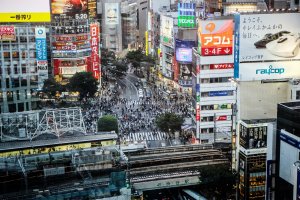 As one of the most important transportation hubs for Tokyo and the surrounding prefectures, Shibuya Station is used by an average of 2.4 million people every weekday. Shibuya Station is the third busiest station in Tokyo after Shinjuku Station and Ikebukuro Station.

The station itself is home to numerous lines including the JR Yamanote Line, various Tokyo metro lines, and the Den-en-toshi Line, which runs to some of the capital's most popular suburbs.

Whether you can find your way around Shibuya depends on which station you use and whether it is above or below ground. Of course there are many signs showing the way, but it can still be a bit confusing. For better orientation there are also some information desks where you can ask questions in an emergency.

Shibuya Station is one of Tokyo's busiest destinations. Find out how to navigate your way around the station.

One of Japan's unofficial landmarks, the Hachiko statue in Shibuya is a homage to the faithful Akita dog who waited at Shibuya..

Everyone knows about Shibuya's Hachiko statue, the most popular meeting point possibly in all of Japan. However, on the southwest..

Halloween has been steadily building momentum in Japan over the past few years, with this Tokyo event in October a highlight. The..

The Tokyu Food Show is a top-class international food marketplace located below Shibuya Station. The first basement of the Tokyu Toyoko Department Store..

This ramen restaurant was founded in 1985 in Hakata, the birthplace of ramen. Its taste has won a following among foreigners and it has expanded abroad...

Opened on November 1, 2019, Shibuya Scramble Square is a 230-meter-high skyscraper that forms part of the Shibuya skyline. There are numerous shopping,..

Shibuya Sky is an important part of the Tokyo skyline and, with its 229 meters, leaves an unforgettable impression on its visitors. It is the highest..

The Shibuya Fukuras building, which opened in November 2019, is the latest in a series of skyscrapers that are part of the Shibuya skyline and defin..