Located next to the ruins of the castle that launched the 1592-1598 Japanese invasion of the Asian continent through Korea led by Toyotomi Hideyoshi, the Saga Prefectural Nagoya Castle Museum is dedicated to documenting and preserving historical exchange between the Japanese archipelago and the Korean Peninsula as well as promoting friendship. The remnants of the fortress area and its maintenance also a main focus. Programs such as Korean language courses, cultural studies, and school exchange activities are furthermore available as part of the museum’s support of academic and cultural exchange.

The museum’s main exhibition area is organized into four main parts: before Nagoya Castle, the history of the castle, after the castle, and the Special Historical Landmark of the Nagoya Castle Ruins and the Encampment Sites. Items on display span a large range of history, from ancient times to the recent era.

Highlights of this small museum include two large replicas of ships used by each of the countries 400 years ago during the time of the invasion. The double-masted Turtle Ship is credited to the Korean admiral who battled Hideoyshi’s invasion, Yi Sun-sin. It has two-dozen canon holes and a dragon-shaped head at the bow, which could launch intimidating flames, protective (or poisonous) smoke, or even cannon fire. Though distant cannon attacks were possible, close assault was its primary tactical use. The ship would ram and sink adversaries. The deck was also armored, protecting it and the crew from arrows, bullets, and fire attacks, and it possessed spikes to deter manned boarding—the primary naval attack method of the Japanese at that time.

The other ship, a Japanese vessel of the Atake type, had comparatively fewer weapons and was less maneuverable. It operated more like an armored fortress. The leadership of Yi Sun-sin and his ship superiority contributed much to repel the Japanese invasion.

After this war with Korea, further exchanges of art and culture took place, including pottery techniques new to Japan. Korean ceramic arts took root in Saga and launched new industries that eventually became the Imari and Arita schools of pottery that are highly regarded today. You can see examples of such pottery here.

Further items of interest in the main exhibition area include exquisite kimonos, scale models of the castle and town, paintings, objects of art, maps, old travel brochures, textbooks from during the colonial era, and other artifacts.

Although Korean-Japanese relations have been stressful for centuries, with the Hideyoshi invasion and modern colonial period being low points, this museum aims to study history and learn from it in order to create a better future. 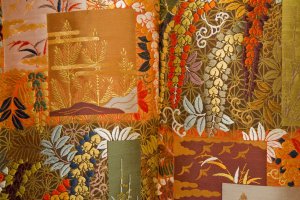 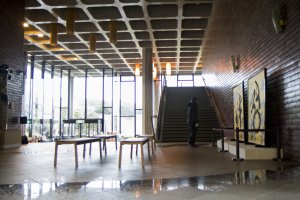 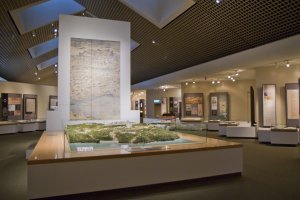 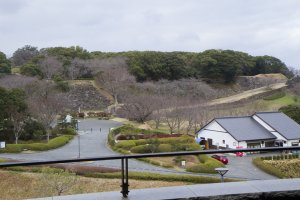 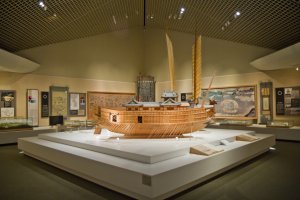 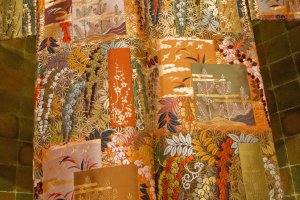