Kanasana Shrine is a 1900 year old shrine in Saitama. It is a unique shrine in that it venerates the mountain rather than a religious artifact like most other shrines. The shrine is located in the mountain town of Kamikawa in Saitama Prefecture, but on the border of Gunma Prefecture. Within Saitama, it is one of the most famous places for 'hatsumode'.

The shrine is quiet for most of the year, but at New Year, it attracts thousands of visitors. People come to the shrine for "hatsumode", the first worship of the year. The event is held annually between January 1st and 3rd. It is particularly busy on the 3rd, because the nearby Daiko Fushoji Temple holds a Daruma market. The shrine normally opens from 9 am to 4 pm, but for the New Year period, the extended hours are from 8 am to 5 pm.

By car: The shrine is about a 25 minute drive from the Honjo Kodama Interchange of the Kanetsu Expressway on national route 462.

By public transport: A bus goes from Honjo Station on the Takasaki Line. Take the Asahi bus bound for Kamiizumi Sogo Shisho-Mae and alight at the Shinjuku bus stop. The shrine is about a fifteen minute walk from the bus stop. 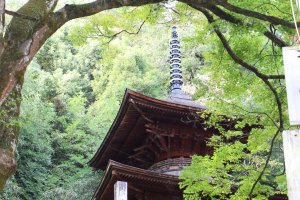 Elena Lisina 2 years ago
It must be crowded by the New Year!
Reply Show all 1 replies

Lynda Hogan Author 2 years ago
I would love to go next New Year, but because of the expected crowds we'll wait until there's a corona vaccine!!
Reply
2 comments in total