A Hawaiian-themed event at the Tokyo Marriott Hotel

From June 1st until August 30th, the Tokyo Marriott Hotel will be hosting a summery afternoon tea event that brings the tastes of Hawaii to Japan. The Aloha Afternoon Tea 2021 will include a variety of both sweet and savory items, including the likes of pineapple mousse, haupia (a traditional Hawaiian coconut milk-based dessert), and coconut-scented mahi mahi topped with a yogurt sauce.

The afternoon tea is priced at ¥ 5,800 for the daytime sittings, or ¥ 7,500 yen for the 6 pm evening sitting which includes champagne or a non-alcoholic cocktail. Reservations can be made online via the official website.

The Tokyo Marriott hotel is located eight minutes on foot from Kitashinagawa Station, which is served by the Keikyu Main Line.

For those who opt to drive, paid parking is available at the hotel- it's charged at a rate of 600 yen per hour up to a maximum of 2000 yen per day. 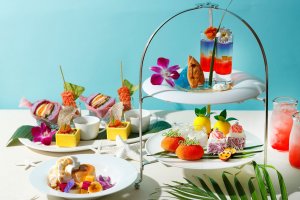