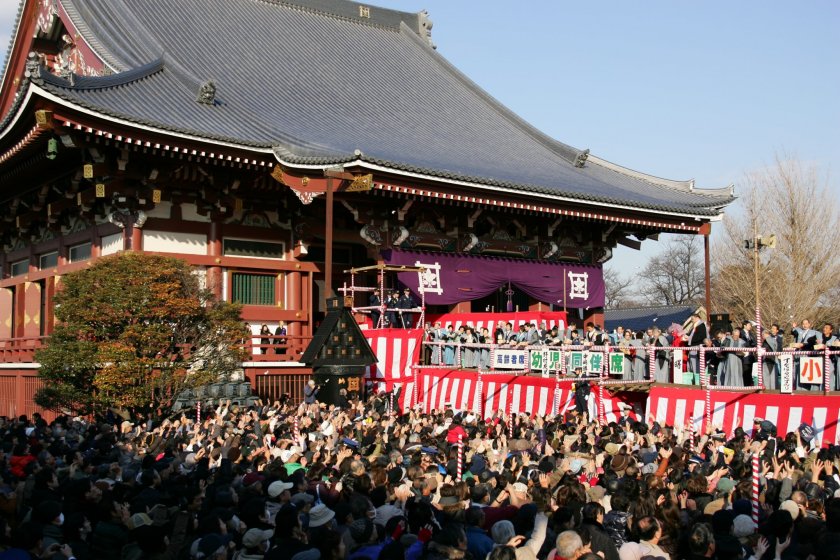 As I walk up the hill to Ikegami Honmonji, I pull my hat down a little further against the February wind. Located deep in the heart of Ota-ku, one of Tokyo’s 23 wards, the temple is the largest and most famous of this area. Established near the end of the thirteenth century by Nichiren Shu, a Buddhist priest who insisted that chanting the Lotus Sutra was the only means to enlightenment, Ikegami Honmonji is also famous for its Setsubun no Hi Festival.

Held on February 2, 3, or 4, Setsubun no Hi or Bean-throwing Day Festival, marks the official beginning of spring according to the Japanese lunar calendar. To start the new season off right, dried daizu (soy beans) are tossed and eaten all in the name of scaring evil away for a year and inviting good luck to come and stay. Started some time during the Muromachi Period (1336-1573), families gather in doorways just after dark with beans in hand. One member of the household wears a demon mask and gives a menacing roar as the rest of the family throws the dried daizu at them to scare them away while chanting: “Oni wa soto! Fuku wa uchi! (Evil out! Good luck in!)”

“You have to hit them in the eye,” a friend explains as we make our way up the steep stairway to Ikegami Honmonji’s main gate. The two guardian spirits standing on either side loom over us as we pass into the central grounds. A long stage decorated in red and white cloth runs out from the main building. A few people sit on party sheets, a.k.a. small tarps, reading newspapers or eating snacks. The space on both sides of the long stage has been cordoned off into sections.

As we wander about the grounds taking in the five-story pagoda, the oldest of its kind in Tokyo, nearly 150 blue-uniformed policemen appear and begin positioning themselves about the stage and near the buildings. They well outnumber the number of visitors at that moment, but before I can comment the sound of drums draws us over to the stairs.

Far below, chanting priests lead a double-row of celebrities that includes wrestlers, actors, singers, and television personalities as well as local dignitaries. They will throw the beans this afternoon, and as they pass, cameras snap and the crowd murmurs in excitement. The long train files into the main temple building, and the rest of us take up our positions along the stage.

The crowd steadily grows, and by the time the throwers file out to take up their positions, the central courtyard is packed. A policeman announces the rules: take only the beans you catch; don’t take beans from someone else; don’t hit. A bell rings and bags of beans begin to fly.

The children next to me scramble with Olympian speed to gather bags that fall on the ground, and adults leap and lunge as though their lives depended on it. I get hit on the head, the eye, and shoulders by bags of beans as I join in. The policeman continues his safety announcement until finally all the bags are gone. The crowd claps, and I check the time. Only eight minutes passed since the first bag was tossed.

My friend and I walk over to the food vendors to wait out the rush for the trains.

“Wait. Does this,” I ask holding up one of the three bags I caught, “mean we are oni?”

“No,” she laughs as she wraps her hands around a steaming cup of amazake (a drink made from sake lees). “If you eat one bean for each year of your life plus one more, you’ll have good luck all year.”

So much good fortune tied to a simple bean, I think, as I start crunching and counting. 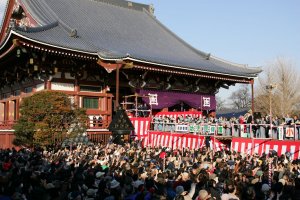 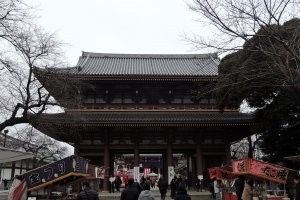 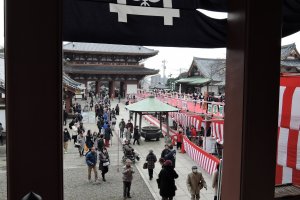 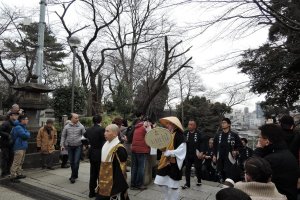 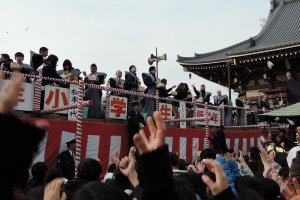 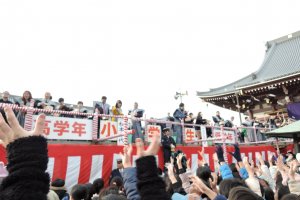