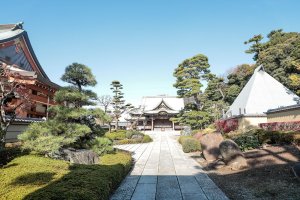 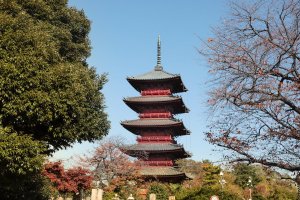 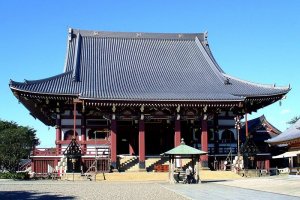 Ikegami Honmon-ji is a temple of the Buddhist sect Nichiren Shū south of Tokyo, which was built where the founder of the Nichiren sect is said to have died. Nichiren's disciple Nikko also spent the rest of his life in this temple. On the site of the temple is also the administrative seat of Nichiren Shū.

A short walk from Ikegami Station or Nishi-Magome Station, Ikegami Honmon-ji is home to a number of buildings, most of which were reconstructed after the March 15, 1945 bombing. These include the five-storey pagoda, built in 1608, which is recognized as an important cultural asset. The kyōzō pagoda, built in 1784, is a repository of religious writings and the hōtō pagoda, built in 1781, where Nichiren was cremated. Other buildings have been rebuilt or rebuilt since 1945.

Hashigo-nori is a traditional performance that attempts to pass on the techniques and methods of fireman in the Edo period.

Find out how to join in one of Tokyo's largest Setsubun Festivals and celebrate traditional Spring like a local. Beans, good..

Ikegami Honmonji is an incredibly beautiful Buddhist temple widely spread across the top of a hill in Tokyo's Ota Ward. It contains..

Oeshiki is an annual festival at Tokyo's Ikegami Honmonji temple. Held to honor the death of Saint Nichiren, 300,000 people..

Ikegami Honmonji Oeshiki Festival is one of Tokyo’s most famous and memorable festivals, with a history dating back more than ..

Find out how to join in one of Tokyo's largest Setsubun Festivals and celebrate traditional Spring like a local. Beans, good..

Five hundred wind chimes are strung across the temple grounds of Ikegami Honmonji at the top of the long staircase that leads to..

Hashigo-nori is a traditional performance that attempts to pass on the techniques and methods of fireman in the Edo period.

Opened in 2017. This is a bar equipped with a wine cellar, which offers craft beers as well as over 30 types of craft gin, alongside a regular dining..

The first cinema complex to open in Japan features three screens. In addition to the latest popular films, you might see a film you wouldn't expect..

The shopping building is right in front of you as you come out of Omori Station. It sells food, everyday items, fashion, medicine, and more. Electrical..