The official opening of this purpose-built comedy venue

There's been English-language comedy in Tokyo for a long time, mostly performed at shows held in a variety of cafes and bars around the city. However, on 6th May 2022, the Grand Opening will be held for Tokyo Comedy Bar, a dedicated, purpose-built venue, just a minute from Shibuya crossing.

Designed specifically for comedy, the cosy performance area has a low ceiling to create an ideal atmosphere for the audience. The bar area will have a selection of craft beers on tap, plus a range of other drinks for all tastes. There'll be different shows every night of the week, with open mics and showcases in both English and Japanese, and there will also be classes available for anyone who wants to learn the crafts of either stand-up or improv comedy.

On Grand Opening night there are two English-language shows featuring the cream of Tokyo's stand-up comedy talent. Each lasts 90 minutes, the early one starting at 7:00pm, the late show at 9:00pm. Tickets for each show cost ¥2500, and can be ordered in advance online through the website.

The bar is on Wave-Dori, the side street next to Mark City, close to Shibuya crossing and the Inokashira line station. 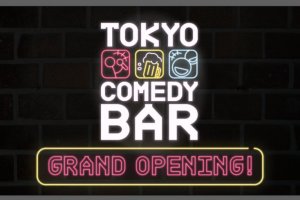 Justin Velgus 3 weeks ago
This isn't a joke, right? Dedicated comedy club is just what Japan needs. I like the idea of bilingual offers to introduce the Japanese people to western style comedy. The improv classes sound fun too! I look forward to one of your future performances!
Reply Show all 1 replies

Peter Sidell Author 3 weeks ago
Do join us for one of the open mics when you find yourself in Tokyo again!
Reply

Kim 4 weeks ago
Great location for a comedy bar!
Reply Show all 1 replies

Peter Sidell Author 3 weeks ago
It is, just half a minute if you're on the Inokashira line!
Reply
4 comments in total