One of Japan's most spiritually significant locations

If you’re planning a trip to the Kansai area and love Japanese culture and religious history, Koyasan definitely needs to make its way onto your itinerary.

Koyasan, a small mountain town located in northern Wakayama Prefecture, is home to esoteric Shingon-shu Buddhism founded by Kukai (posthumously Kobo Daishi) in 816. Kukai traveled to China in 804 to continue studying Buddhism, wherein he learned esoteric Buddhism from his teacher, Master Hui-kuo. After Hui-kuo’s death two years later Kukai returned to Japan, and in 816 the Japanese Imperial Court allowed Kukai to establish his monastic complex in present-day Wakayama Prefecture – away from earthly distractions – and continued to teach Shingon-shu Buddhism until he entered his eternal meditation in 835.

Access to Koyasan is limited to two options: bus/private car, or cable car. There is only one windy roadway to travel either up or down the mountain reserved for gutsy motorists, otherwise all other travelers must take the cable car up the mountain. Leaving at regular intervals, the cable car ride from Gokurakubashi Station to Koyasan Station takes approximately five minutes, and offers great views along the way, especially of the momiji (maple leaves) in autumn. A bus takes tourists from Koyasan station into town, and conveniently stops at all major destinations.

It’s easy to spend a relaxing weekend in Koyasan, but if your time there is limited, the “must-see” items on your list should include Kongobuji temple, the Danjo Garan complex, and Okunoin cemetery.

In plainest terms, Kongobuji temple is the headquarters of Shingon Buddhism. The current structure is a reconstruction commissioned in 1863, but the history of the site has been documented as far back as the 9th century. The temple and grounds span 160,000 sq. meters, and includes the main temple, meditation halls, a belfry, a storehouse, a tea house, and other important buildings like the Okuden. Kongobuji is also home to Japan’s largest rock garden, the Banryutei. The garden is 2,349 sq. meters long and depicts two dragons (a male and female) protecting the Okuden; the dragons are made of 140 pieces of Shikoku granite and imported sand from Kyoto.

The Danjo Garan complex is one of Koyasan’s most important historical and religious sites, as it is home to several religious buildings and monuments. The most impressive feature of the complex is the Daito (Great Pagoda), which Kukai designed as the “heart” of his monastic complex. Construction began in 816, and was completed around 889; the current structure is a reconstruction commissioned in 1937 and is over 160 feet tall. The Danjo Garan is also home to the Miedo (Portrait Hall), which is supposedly where Kukai lived during his time there. Enshrined inside of the Miedo is the only portrait of Kukai painted by his disciple and successor Imperial Prince Shinnyo; the building is closed to the public except on March 21st, the anniversary of Kukai’s eternal meditation.

Finally, Okunioin is the largest cemetery in Japan, containing more than 200,000 graves and memorials, ranging from feudal lords to peasants. At the edge of the forested cemetery sits Kukai’s mausoleum, where he has been in seclusion for over a thousand years. This is typically the last stop for most religious pilgrims traveling the Kumono Kodo, and is a great place to end your day at Koyasan.

Semi-英語の先生. Onigokko champion. Lover of all things bookish and nerdy. Be a grown up when I grow up. 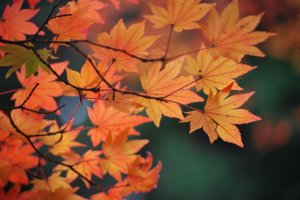 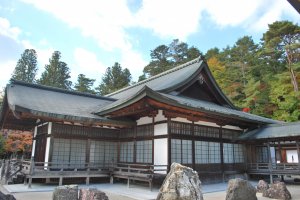 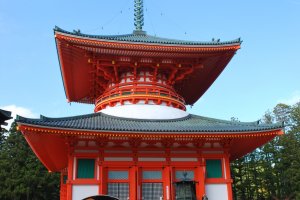