Held at Tagata Shrine every March 15th, Tagata Honensai is a fertility festival to celebrate a bountiful harvest, prosperity and all things fertility. It is held in the city of Komaki, just north of Nagoya, and can be considered one of Japan's many penis festivals

The upcoming matsuri promised to be a bit different to other Japanese festivals I’d attended. Not because it sounded like it would be any less of a party – quite the opposite, in fact. You see, the Tagata Honensai Matsuri is a fertility festival, and the main event centres on the lively procession of a large wooden phallus from one shrine to another. Just as I thought I was getting to the stage where nothing in Japan could surprise me anymore, this popped up.

Arriving at the train station on the morning of the festival, I joined a steady stream of people headed for the main shrine, aided by some helpfully bilingual signs. Along the way, we passed food stalls selling typical festival fare, but with the addition of brightly coloured phallic lollipops and chocolate-covered bananas. There were also souvenir stalls selling some rather racy sake cups and ash trays, whilst an elderly man proudly displayed his fertility-themed artwork.

Tagata Shrine itself is thought to date back 1500 years, and houses a female kami, or god, embodying fertility and renewal. The grounds are strewn with phallic-shaped rocks set tastefully amongst shady bushes and trees, whilst the shrine building contains a selection of wooden members in varying sizes. I watched worshippers of all ages queue up to ring the rather unconventional bell hanging above the entrance, before rubbing the tip of the nearest statue and saying a prayer.

The festival began quite tamely around midday, with a taiko performance followed by the arrival of some colourful floats decorated with paper streamers. I wandered away from the main shrine to a smaller shrine where the centrepiece of the day was awaiting its big moment, flanked by a very detailed anatomical banner.

At two metres long and weighing in at a hefty 280 kg, the large wooden carving, housed in a mikoshi (portable shrine) and glinting warmly in the sunlight, was an impressive sight. A new carving is lovingly produced every year, with the previous year’s phallus auctioned off to the highest bidder, presumably to be placed in their personal altar and no doubt providing an interesting conversation piece at dinner parties.

Suddenly, I found myself being thrust towards the carving by a crowd of mainly middle-aged Japanese men clutching at their zoom lenses.

“Touch it! Touch it!” they shouted excitedly. As I awkwardly patted the carving to the sound of numerous shutters clicking, I wondered briefly whether this counted as harassment.

“Kiss it!” shouted another one. At this point, I decided my moment of celebrity was over, and beat a hasty retreat.

Then came the climax. A group of men, all aged 42, hoisted the mikoshi onto their shoulders and began the procession to the main shrine. It’s believed that the honour of carrying the phallus will bring them luck during this otherwise inauspicious year, age-wise. Despite the weight, the men merrily span in circles and bounced up and down, much to the glee of the crowd.

They were probably aided by the generous pouring of sake, which was handed out freely by cheerful volunteers. I quickly discovered that if I walked at the same speed as the sake cart, my cup would be swiftly refilled, and so I spent the majority of the parade there, trailing a few metres behind the big attraction. It seemed that a number of other people had the same idea, so I ended up sharing snacks and conversation with some new friends on the kilometre-long walk between the two shrines.

By the time we reached the main shrine, I was feeling very jovial. After the phallus was inserted into its new home for the coming year, people gathered in the adjacent square in anticipation of the mochi nage, or rice cake throwing. Town officials showered supposedly lucky rice cakes from raised platforms above the square, whilst the crowd below scrambled to catch them.

I enthusiastically threw myself into this and was very proud when I managed to grab hold of one - alas, only to discover that it was rock solid and not particularly tasty.

As events started to wind down, I made my way (somewhat unsteadily) back towards the train station and reflected on what a fantastic day it had been.

For a people whose national trait is that of polite reservation, festival time is when the Japanese really come out of their shells, and the Tagata Honen Matsuri was no exception. As well as being the most unusual matsuri I’ve attended, it was the fun and welcoming atmosphere that really made it so memorable. The crowd was a mix of Japanese people and foreign tourists, ranging from young families with children to elderly couples sucking on their novelty lollipops. The sun shone, music played, sake flowed ... and everyone was in an exceptionally good mood.

If you get the chance to visit Komaki on 15th March, I would wholeheartedly recommend it. From my personal experience, I’d definitely rate this as one of Japan’s must-see festivals. And of course, make sure that you stick close to the sake cart!

Tagata Shrine is about 5 minutes walk from Tagatajinja-mae Station (Meitetsu-Komaki Line). It can be reached in about 50 minutes from Nagoya station.

Find out more about Tagata Shrine. 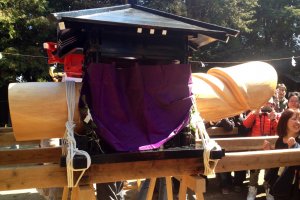 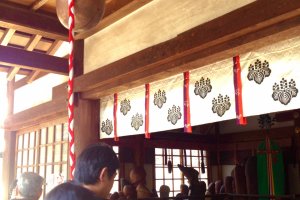 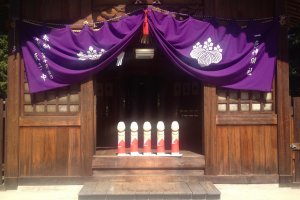 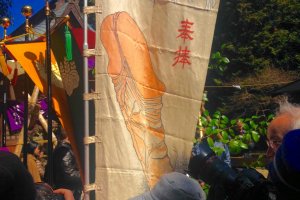 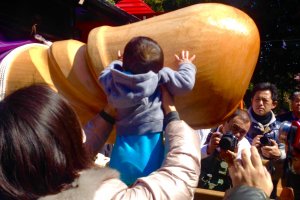 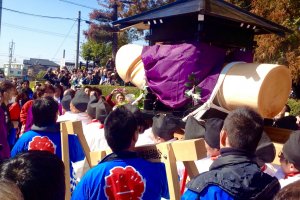 Sherilyn Siy 2 years ago
Now to have a similar giant replica of the female reproductive organs.
Reply Show all 0 replies

Amber Mezbourian Author 7 years ago
Interesting is definitely one way to describe it. ;)
Reply

Veronika Tomanova 7 years ago
Haha:) Got your point!
Reply

Relinda Puspita 7 years ago
One of unique festivals that I have seen in Japan.
Reply Show all 2 replies

Amber Mezbourian Author 7 years ago
Yes, this was definitely a unique experience for me!
Reply

Veronika Tomanova 7 years ago
How was it?
Reply
7 comments in total