The Hirosaki Cherry Blossom Festival takes place at the Hirosaki Castle Park each year between April 23rd and May 3rd. Regarded as one of Japan’s Top 100 Cherry Blossom viewing sites, the park is home to around 2600 cherry trees encompassing several different varieties including the likes of Somei Yoshino cherry blossoms and Shidarezakura (also known as weeping cherry blossoms).

Interestingly, the trees at the park here are said to yield more blossoms than at other places in Japan due to a special pruning technique that was derived from apple tree pruning. The perks of being in Japan's largest apple producing prefecture, perhaps!

The event also typically includes illuminated trees each evening until 10 pm, allowing visitors to appreciate the beauty of the blooms after dark.

Hirosaki Castle Park is around 12 minutes on foot (or a five minute cab ride) from Chuohirosaki Station, served by the Konan Railway's Ōwani Line. 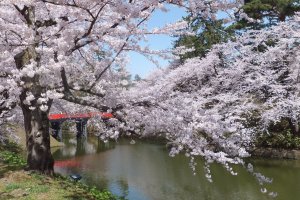