Celebrating the phallus in Kawasaki

The Kanamara Matsuri (かなまら祭り or ”Festival of the Steel Phallus”) is one of the most unusual festivals in Japan. Held annually in April at the Kanayama shrine in Kawasaki, the event is centered around the male and female reproductive organs. Not surprisingly, it draws a huge crowd, with the majority clearly foreigners who flock from all corners of the world to gawk and giggle at this unique event. The penis, the central theme of the event, is reflected in illustrations, candy, carved vegetables, decorations, and a mikoshi (portable shrine) parade.

I heard about this festival many years ago but was finally able to take some time off work to go this year. As expected, when we arrived at about 1pm, the place was packed. It was hard to move anywhere around the small area without being bumped or shoved. We decided to first line up to buy the infamous penis and vagina candy (600 yen each) and ended up queuing for about half an hour to get these novelties – a few desperate people even cut in line. Proceeds are donated to fund HIV research.

Around the festival, there were plenty of food stalls, several of which sold sex-related ornaments. There were t-shirts for sale emblazoned with "penis" and some raunchier messages. There was no shortage of photo opportunities, as I saw people wearing funny sexual objects on their heads, guys wearing elaborate full-latex outifts, a man wearing a cat costume, an old man carrying a penis and vagina made out of mochi rice, some transsexuals enjoying hanami under the cherry-blossoms, and plenty of people sucking on genitalia lollipops.

The main attractions were the iron penis mikoshis which were carried into the main shrine. A priest sends prayers to the heavens and everyone follows his lead. Kanamara was once popular among prostitutes who wished to protect themselves from sexually transmitted diseases. The parade starts around 12pm and moves from Kanayama Shrine along Daishisando before reaching Kawasaki Daishi temple. The iconic pink penis, named Elizabeth, was donated by a drag queen club called Elizabeth.

After the parade returns to Kanayama Shrine, you may want to take a 10-minute walk to Kawasaki-Daishi temple, which is similar to Asakusa. There are plenty of stalls and shops to keep you entertained.

Overall, it was a fun, interesting festival. I recommend going at least once, though it was extremely crowded and a pain walking around with people constantly bumping into you. 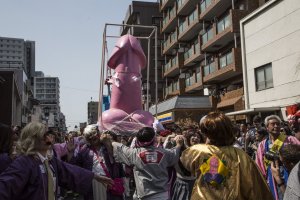 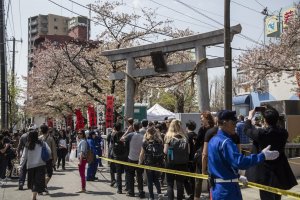 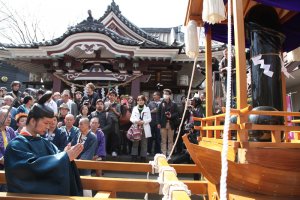 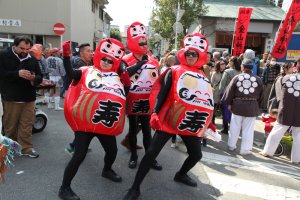 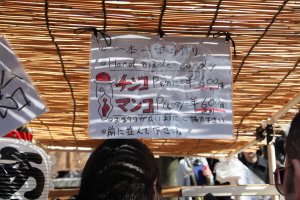 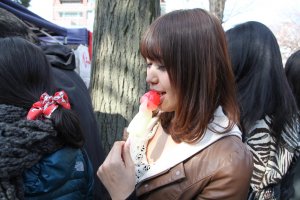 Peter Oxley a month ago
Actually, I see this as an ancient Japanese fertility rite. It would be a pity if it has become sensationalized by lager-wielding foreign nationals. When I went there in the early nineties, the event was imbued with a certain degree of reverence,
Reply Show all 0 replies

Elena Lisina 3 years ago
It's a bit odd :)
Reply Show all 0 replies

Guillaume Doré 3 years ago
I went a couple of years ago and I am not sure I would really recommend. Sure if you are with friends you will end up making lots of silly jokes, but on the other hand, this is just a small festival that got it's popularity somehow out of control, especially with foreigners who exited to see this strange festival, that make a big part of the crowd.
Reply Show all 0 replies
4 comments in total