In the northeast area of Tokyo’s special wards lies the beautiful area of Katsushika. Katsushika ward is the home of friendly locals, the historical Daikyo-ji Temple, the celebrated Horikiri Iris Garden—the only traditional watashibune (ferry boat) service in Tokyo—the shooting location for a series of well-known Japanese films, and the birthplace of the creator of the world famous series, Captain Tsubasa.

Captain Tsubasa, written by Yoichi Takahashi , is a long running manga, anime, and video game series that follows the journey of the young Tsubasa Ozora and his football dreams in Nankatsu, Shizuoka. The series reveals the growth of Tsubasa as he faces several challenges from elementary school all the way to his professional career in FC Barcelona for La Liga. Tsubasa, known as “Football no Moshigo” (heaven-sent child of football), had amazing skills since a very young age. Throughout his journeys, he grew as a player and was met by other notable characters such as Genzo Wakabayashi, an extraordinary goalkeeper, Ryo Ishizaki, best friend and captain of Tsubasa’s elementary school football team, and Sanae Nakazawa, Tsubasa’s biggest cheerleader and, later on, wife.

The Captain Tsubasa manga series was originally featured in Shueisha’s Weekly Shonen Jump comic book magazine from 1981 and 1988. It was followed by a number of sequels such as Captain Tsubasa: World Youth (1994-1997), Road to 2002 (2001-2004), Golden 23 (2005-2008), Kaigai Gekito Hen (2009-2012) and Rising Sun (2013-present). The series has sold over 70 million copies worldwide and is known as one of the best selling manga series. A number of movie versions were produced, along with 3 animation series aired so far. From April 2018 a new animation will be broadcasted making it the animations fourth work.

The author, Yoichi Takahashi, was born in Katsushika City and attended Minami Katsushika High School. While the areas of Yotsugi and Tateishi already had bronze statues of the main characters an event was held on March 18th to promote the Captain Tsubasa Collaboration. The bronze statues, local buses, station boards are all parts of the Captain Tsubasa Collaboration featuring artwork from the series.

The ceremony started Sunday morning in front of Minami Katsushika High School. Fans, local officials, students, the Minami Katsushika High school band and football club, gathered for the dedication of the newest statue. After quick introductions and speeches were delivered, the group, including Mr. Takahashi, revealed the beautiful new bronze statue. This bronze statue replicates the famous "Twin shoot" scene where Tsubasa Ozaora and Taro Misaki both shoot at the same time. It is the world's first bronze statue where you can pretend to be Taro Misaki and take that famous shot next to Tsubasa Ozora.

Following the ceremony, there were plenty of activities for tourists and fans. Some of the activities included viewing illustrations, shopping in Yotsugi using the Captain Tsubasa point card, and purchasing special edition souvenirs such as the bronze statues cellphone strap. Maps were available for visitors to check out all 9 of the famous statues. Once you visited 9 statues, you could get an original illustration selfie photo frame on your mobile. (The app is available on the katsushika_Free_wi-fi network, located near each of the statues.)

While researching the series, I asked many people if they had heard of Captain Tsubasa and I received positive responses about what a huge influence it had been on them and others they knew. In the words of Tsubasa, “I can’t lose because it’s my dream. Football is my dream”. 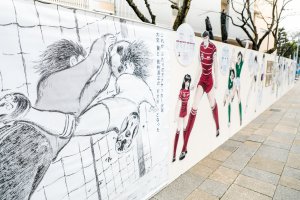 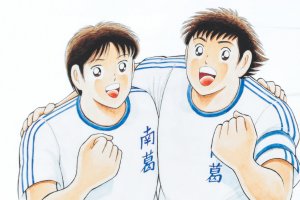 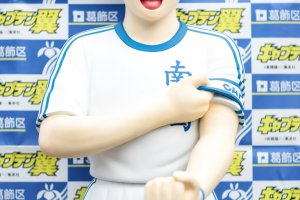 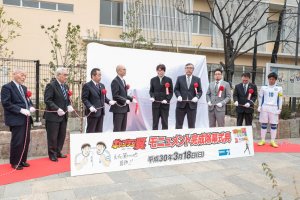 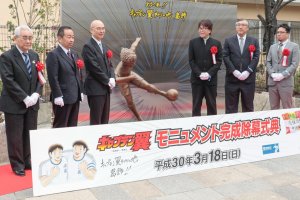 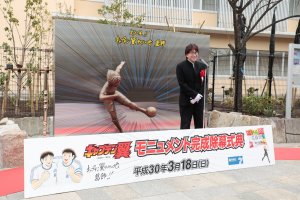 Scott Brause a year ago
Very informative! I used to live in Katsushika (Yotsugi.) Nice to read about a local place few visitors to Tokyo ever see!