Iwate is a beautiful prefecture located on the northeastern coast of Honshu, Japan’s main island. Situated along the Pacific coast and full of various mountainous areas and beaches. If you are looking to spend time with nature, see breathtaking scenery, and enjoy good food then you should definitely take a tour in Iwate.

Thanks to efforts by the Tohoku Reconstruction Agency of Japan project, contents are increasing in Tohoku. This time, we experienced the "Sake and Artisan's Journey" as created by the Tohoku Seven Newspaper Association, a local media. Using local buses and trains we gained insight into the lives and cultures of the locals and Japanese craftsmanship that can not be found in tourist destinations. We were also able to see the area of the disaster-afflicted area. 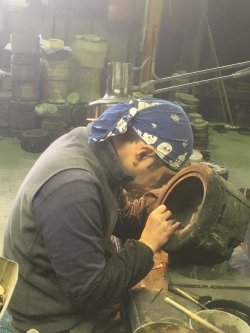 Founded in 1898 this southern steelworker has been around for over 110 years and received the No. 1 "National Traditional Crafts” award for iron casting. In Iwate prefecture, they specialize in “Nambu tekki” ironware which is a very stylish type ironware that first originated in the middle of the 17th century. When visiting Iwachu you can take a tour of the facilities, watch master craftsmen at work, learn the ironworks process, and my favorite part, touching all the expensive giant tea kettles.

The iron factory also houses a shopping area where you can purchase iron cookware and trinkets. I know I’m buying my self one of those cast iron skillets.

Also located in Morioka city is Chokurian, a soba house famous for its sake soba (rice wine & buckwheat noodles). Making soba since the Meiji Era this two-story building welcomes you with a very Japanese style decor and delicious food. Not only is the soba good, so is the locally produced sake, fresh seafood, and veggies served along with it.

The sake served with your soba is called, “Azumamine” and it’s locally produced in Shiwa town, south of Morioka city. Your soba is presented in a “soba seiro”, which is a square container with bamboo reeds as the divider. Once served, pour your sake over the soba and enjoy.

Chokurian even does take out orders.

After filling up on soba, I moved on to my next location further north in Aomori Prefecture another beautiful destination located in Japan’s Tohoku region. Aomori is full of natural resources, hot springs, and autumn foliage making this place a popular spot for both agricultural and artistic means.

If you are a sake lover, you have to stop by Hachinohe. This now 8th generation, sake brewery was founded in 1775, and its growing popularity has won the brewery a gold medal in the International Wine Challenge & Liquor Division. Produced from the famous waters in Hachinohe district where the sake production uses locally grown rice and yeast exclusively. For only 500 yen you can take an hour wine tasting tour and learn about the different type of sakes they produce.

Known as one the biggest morning markets in Japan, Tatehana Morning Market is only open on Sundays and boasts ten of thousands of people every week! With more than 300 shops selling different types of fresh seafood, produce, fruits, flowers, a variety of prepared dishes, coffee, sweets, bread, cutlery, and antiques, this morning market is a very exciting place to visit.

From the morning market, I traveled back to Iwate prefecture to the coastal city of Miyako.

Iwate prefecture is a wonderful place to visit full of beautiful scenery and activities. You wouldn’t think that just 6 years ago after a 6.1 magnitude earthquake the prefecture was devastated by a 17-meter high tsunami. On March 11, 2011, in the city of Miyako, a tsunami hit the coast and caused massive destruction to the area. The nearby Taro Kanko Hotel withstood the tsunami and was preserved by the city as an earthquake-disaster memorial. The first 2 floors of the hotel were completely lost during the tsunami leaving only the pillars behind but the remaining floors have been well preserved and you can see them during the tour. You are also taken to the 6th floor and shown a video of the tsunami taken by the hotel’s owner. It’s an experience you shouldn’t miss when visiting the city of Miyako and lets you see just how far the city has come in such a short amount of time.

Not too far from Taro Kanko Hotel, Miyako city holds a salmon and abalone festival once a year. The city is known to have the largest catch of salmon in Japan, and the festival even has a salmon catching competition! This festival was full of energy despite the cold, and there are local stalls selling specialty dishes that you have to try.​

After an exciting 2-days full of sake, festivals, and food I ended my journey and returned to Tokyo. I truly enjoyed my time in Japan's Tohoku region and would love to go back and tour again in the summer. 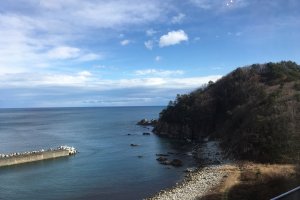 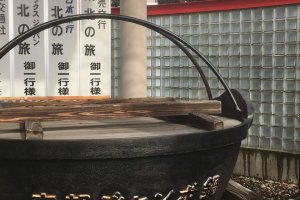 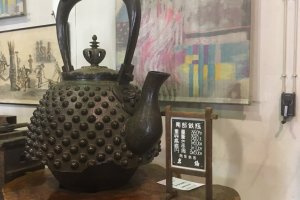 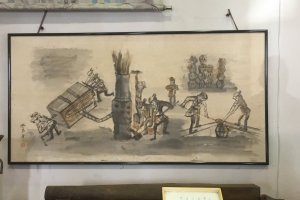 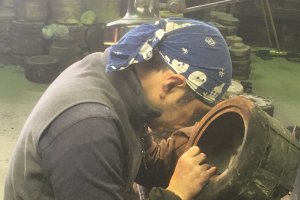 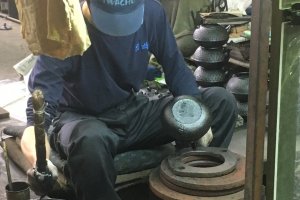