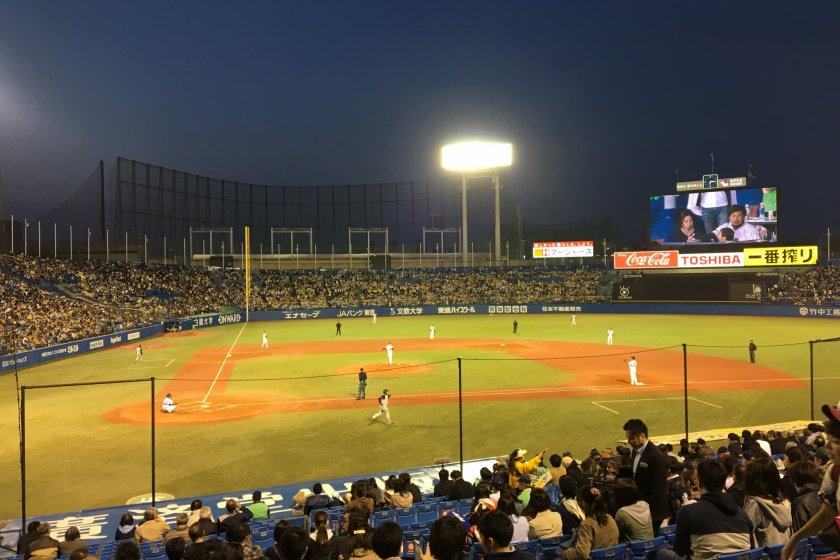 Bring along your umbrellas when you catch a Tokyo Yakult Swallows baseball match whether it is raining or not. You will need it to be a part of the colourful and racuous crowd who celebrate their team's homeruns by fishing out their brollies and bobbing them around in a little dance, creating a rather hypnotic wave from afar.

Tokyo is home to five professional baseball teams, and the Swallows is one of the most centrally located teams with the Meiji Jingu Stadium near Shinjuku as their homeground. On game day, the stretch of pavement lining the path from Gaiemmae station on the Ginza Line to the stadium is packed with vendors from the nearby eateries. Temporary tables are set out on the sidewalk selling all sorts of food and bee. There are no restrictions on bringing food and drink into the Meiji Jingu stadium, so it is a great way to save a little money and have some variety to your game-day meal. If not, there are concession stands at the entrances or you can hail down one of the many young people walking around the stands selling food and drink - beer is especially popular!

Where you sit in the stadium is also another important consideration. The more expensive tickets put you behind the batter's plate so you have a closer view of the batting action. The loudest cheering tends to take place in the cheaper seats near the outfield area which leads the celebrations and chanting when the Swallows are ahead.

If you want to be a part of the cheering action when the Swallows hit a homerun, make sure you learn how to sing the traditional festival song Tokyo Ondo, and bring along the aforementioned umbrella to open and bob along with the song when you do! You can pick up official Swallows gear near the entrance of the stadium. A popular choice among fans is the little plastic baseball bats which you can use to clap along to cheer.

It was about a 10 minute walk to the stadium. I scanned my barcode and exchanged it for a ticket at the little booth outside the stadium gates. Our S Class tickets were situated behind home base and slightly to the right, so we had a pretty good view of the batting action. That said, this section was much quieter compared to the outfield seats, which are cheaper and further away, but apparently we ended up sitting next to the die-hard fans.

Tickets can be purchased online. The Swallows have a pretty comprehensive how-to on their website here if you are comfortable navigating Japanese websites or convenience store machines. The most straightforward way for the casual fan or non-Japanese speaker is to either head down to the stadium directly, or to the Harajuku Tourist Centre to buy your tickets. 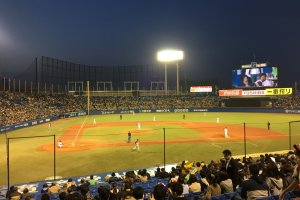 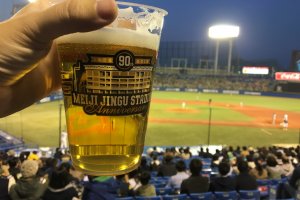 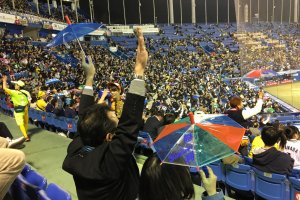