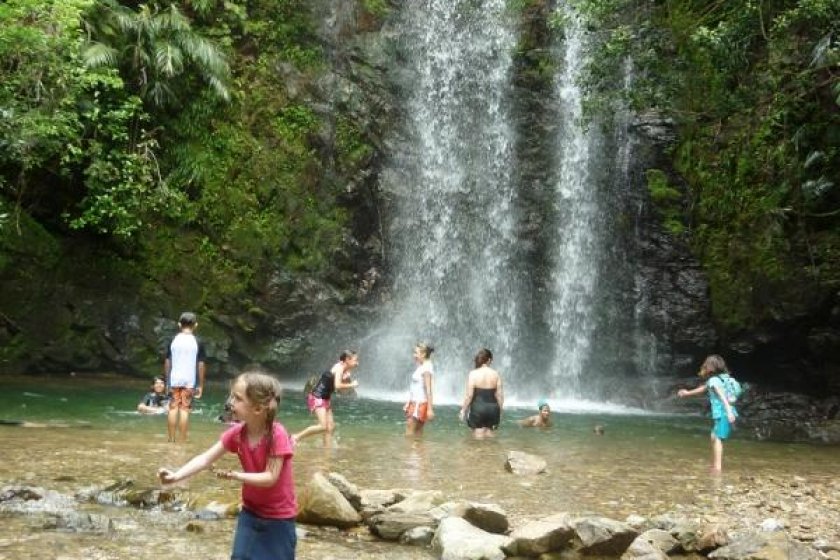 A couple of weeks ago I had the opportunity to go on a family trip in the northern part of Okinawa, to the beautiful Tadake falls. I had heard a lot about this place, and how reaching the waterfall required a trek through the river that it fed. Not really too sure what we would need for the excursion, I followed the advice of the friends who had invited us, and packed various items such as water shoes, towels, changes of clothing, mosquito repellent, sunscreen, packed lunches, waterproof bags, and yen for the expressway and convenience store stops.

The drive to Tadake Falls, from US military base Camp Foster, which is located in the middle of the main island of Okinawa, took approximately one hour, and it was a relatively easy place to find since it involves a single right turn off highway 58, past Nago. I suspect that the earlier you go the less trouble you'll have in finding a carpark; we arrived before noon and were able to park in single file up alongside a treeline that paralleled the river, but later in the day the parking options were very limited.

After a quick reshuffling of backpack contents to ensure we only took what was necessary, we all headed down to the riverbank and waded our way across a portion of the river that required at least knee-high immersion for most. I recall having to wade through another deeper part of the river, but for the most part, the trek involved walking through ankle-deep sections of water and carefully navigating over and around riverbed rocks.

Being a trail runner, I expected the trek to be easy, but to my surprise I struggled with balance issues. Unlike the trails, where I can easily see the ground before me and plant my feet securely with each step, I could not see the rocks beneath the water and consequently pushed ahead with much caution - probably too much caution since I felt unstable a lot of the time. My eight year old on the other hand, and the other kids prodding along with her, seemed to embrace the challenge with little apprehension and so it was no surprise that they reached the waterfall well ahead of me.

One of the advantages, I guess, of bringing up the rear, is that I had more time to appreciate the beauty of the foliage that folded around and over us in an umbrella-like arc. You could catch glimpses of blue sky between the gaps in the trees but if you could imagine being in the midst of a dense tropical forest and in the depths of raw nature, then that's what it felt like (at least when I wasn't concentrating on where my feet were landing).

I think one of the more appealing aspects of trekking this particular river, is that it's degree of risk and danger is fairly minimal. There was however, a small section of river that diverged into a narrow clearing and out into a wider pool of water that was fairly deep and had a stronger current, so the safer option was to climb up over the surrounding rocks and walk a certain distance along a low cliff-line that ran alongside the river. Teamwork was required to get everyone up and over the rocks, but with the additional help of ropes that were secured to trees, it was quite manageable.

Beyond this more difficult part of the trek was a little more river-walking and rock-climbing, and then all of a sudden, the river winds around a bend and halts at the bottom of a magnificent waterfall - the Tadake Falls. This was of course the highlight of the trip and well worth the somewhat tedious effort it took for me to get there (keep in mind that I seemed to be the only person who found it tedious and challenging). Once the waterfall came into sight, it was really quite breath-taking and extremely inviting; most of our group wasted no time jumping into the cascading flow of water.

Others in the group found large rocks to sit down on and enjoy the lunches they had packed, while a smaller group of adults and older kids ventured off on a small climbing adventure that had them hiking up a steep incline to the top of the waterfall.

Meanwhile, back at the base of the falls, the younger kids had fun finding beautiful opalescent stones that were scattered among the shallow parts of the river bed. And the two dogs that had trekked the river with us, ours included, enjoyed playing "swim and fetch."

All in all, this was a great family day out and one I would highly recommend to anyone who enjoys the outdoors. And to end the day on an equally high note, we stopped to eat at Cocos Curry restaurant in Nago - a great place for family dining and a favorite for many Americans living here in Okinawa. 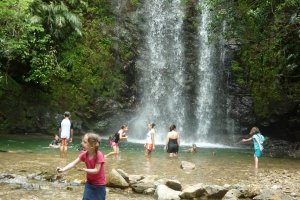 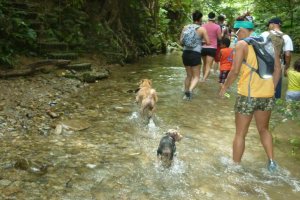 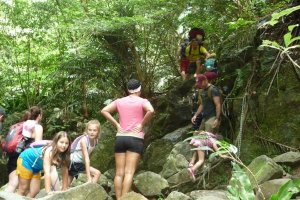 Thais Tanaka a year ago
Tadake Falls is beautiful! A great place to go on the weekend with family and friends, but I recommend going during weekdays to avoid crowds :)
Reply Show all 0 replies
1 comment in total