Dancing, food, performances in the heart of Old Tokyo

The Shitamachi Tanabata Matsuri is one of the most well-known Tanabata festival celebrations. This four-day festival runs from Ueno to Asakusa. It is to celebrate the meeting of two deities: Orihime and Hikoboshi, star-crossed lovers who are only allowed to meet once a year.

Held around July 7, the festival features dancing, eating, and drinking at local stalls, and live entertainment that includes street performances as well as traditional acts like shamisen (a traditional Japanese instrument) and taiko (Japanese percussion instrument) on Saturday. But the main attraction is the parade on Sunday topped with countless decorations.

A fun festival traditional custom invites attendees to write down their wishes on paper and tie it to the bamboo branches that line the streets. The Tanabata festival originates from the Chinese Qixi Festival and is also celebrated throughout Southeast Asia (where it is known as the Star Festival).

It's a great way to soak in the summer around the streets of Tokyo. 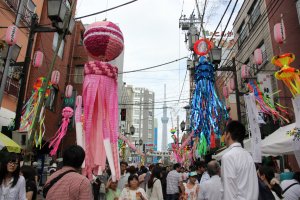 Elena Lisina 2 years ago
Is it on the same dates each year or different?
Reply Show all 2 replies

Kim 2 years ago
Love all the decorations for tanabata matsuri!
Reply Show all 0 replies

Sleiman Azizi 3 years ago
Downtown festivals really are something worth experiencing.
Reply Show all 0 replies
6 comments in total