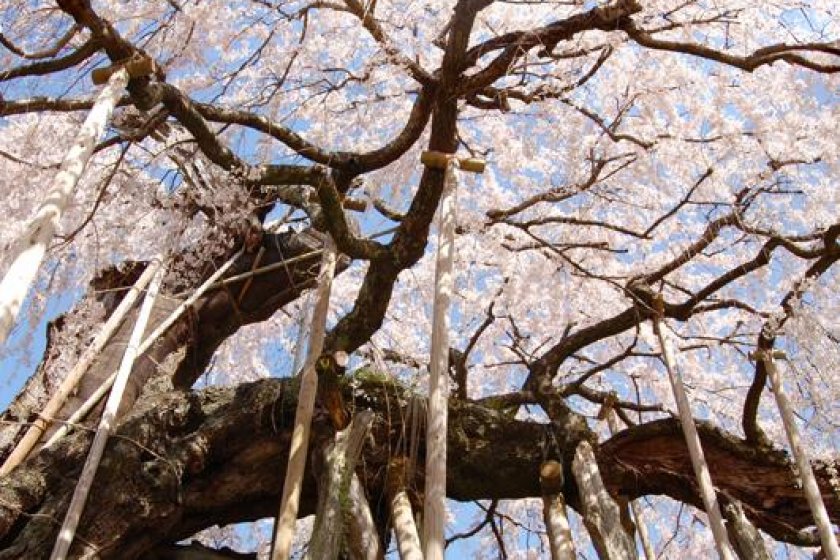 Come hide in the mountains of Uchiko

Ishidatami's weeping cherry blossom tree is the pride and joy of the village.

If you want to really experience Japan, and if you prefer to take it in with a slow, deep breath instead of with an onslaught on all your senses, Ishidatami is the place to come to relax and unwind.

Ishidatami is one of the smallest hamlets that forms part of the greater Uchiko town. Its name refers to the large flat rocks that you can see on the riverbed—rocks, or ishi, that are said to resemble traditional Japanese tatami mats.

The river in question is the Fukumoto, and it runs parallel to the generally narrow Route 243 (later Route 226) that connects Uchiko and Ishidatami. If you tackle this route by car, take it easy and be prepared to adopt the Japanese countryside driving system of pulling over if oncoming traffic needs to pass. Alternatively, it can be enjoyable to cycle from Uchiko to Ishidatami—the effort in getting there is rewarded by the swift return. Do note however that the notable sights are located on higher ground, so some bicycle pushing may be called for. Infrequent buses run from Uchiko station to the local inn and back.

For a stop along the way you can visit Kawanouchi’s Covered Bridge, also known as the Tamaru Bridge, visible on your right soon after you’ve turned onto Route 243. In former times this bridge was used as a river crossing, but also as a storage place for food and agricultural tools. This designated cultural property of Uchiko has been restored by locals and is carefully managed by the Tamaru Bridge Preservation Association.

The spirit of restoration and reservation is also evident once you’ve reached Ishidatami. Look out for signs pointing to the watermills, or suisha 水車. A number of mills were carefully restored by local carpenters and are the proud centerpiece of the Suisha Matsuri, or Watermill Festival, held annually on November third. This autumn festival is the place to feast on local specialties like freshly made soba noodles and mochi, fish straight from the river that's barbequed to perfection, and some warm sake to keep the approaching winter away a little while longer. Locals also organize a number of fun activities for young and old, so you can enjoy fishing or crafts and games, or if you’re feeling adventurous you can slide down the riverbank on the bamboo slide! Performances by local music groups and traditional mochimaki—the throwing of rice cakes for good luck—further add to the lively atmosphere.

Visiting Ishidatami in spring is equally rewarding. Follow signs for Shidarezakura しだれ桜 to find the ancient knotted beauty that is Ishidatami’s weeping cherry blossom tree. Another eventful festival is held here in early April—don’t let the sounds of explosions scare you though, that’s just some of the farmers by the fires preparing puffed rice in large covered metal pans. But if you indeed need to regain your calm, Yuge shrine 弓削神社 is a short walk from the tree. A covered bridge spans a large pond, and leads to the shrine.

Cyclists might enjoy following Route 226 beyond the shrine, onwards to Nagaki (part of greater Iyo city). This makes for a breathtakingly beautiful ride on a clear spring day.

Avid hikers or others who are looking for more than a day trip can contact the Uchiko Tourist Association to enquire about staying at Ishidatami no yado, a traditional Japanese inn. Based there, you can make hiking trips during the day and enjoy homemade local cuisine at night.

For a guided tour of Ishidatami, make sure to book with the Uchiko Volunteer Guides for Foreigners well in advance.

Uchiko is about 25 minutes south of Matsuyama on the express train bound for Uwajima, or 40 minutes by car if you’re using the expressway. Ishidatami is 12 kilometers, about 20 or 30 minutes by car, from Uchiko. 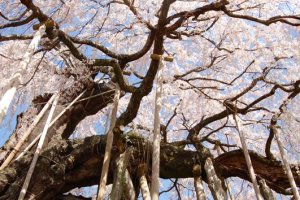 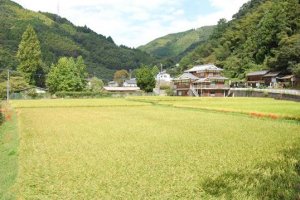 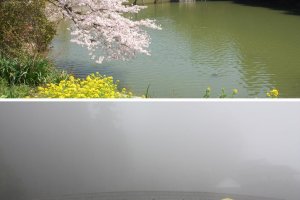 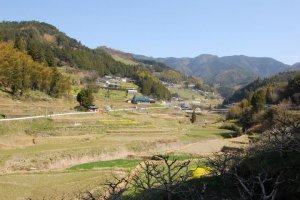 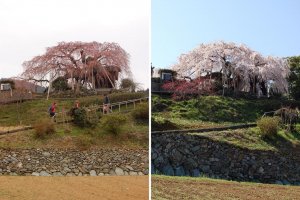 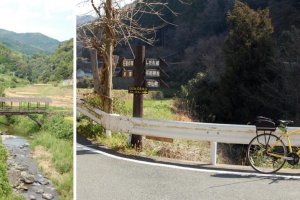