Hakata Gion Yamakasa is Fukuoka’s most well-known and exciting festival. If you’re in Japan in July, or are planning on coming to Fukuoka, I would advise timing your stay to witness this amazing matsuri. With a 750-year history behind it, this powerful festival is a feast for the eyes. The celebration is said to originate from a Buddhist priest named Shoichi Kokushi who, in order to defeat a plague, spread holy water in the streets. From this event the tradition developed and now during the festival water is splashed on participants in the streets.

Starting at sunrise (about 4:59 am) this festival is not for the faint-hearted. However preparations are visible for weeks, with the enormous kazariyama floats being displayed at locations throughout the city and men in traditional clothing being easily spotted during practices starting at the beginning of July. Officially the festival starts on the 1st of July, but the big event, the official float race, does not start until the morning of the 15th.

To get into the real Japanese spirit, one good way to view the festival is to rent an izakaya room and stay through the night. I went to a pre- matsuri party at a bar called Roosta, and at 3 am we headed over to watch the festival from above. Appropriately dubbed the “hips festival” by my slightly tipsy friend, this festival sees Fukuoka men in traditional Japanese shimekomi (loincloth). So yes, you will see many backsides, of all ages. The men also wear traditional split toed shoes and different headbands to denote their stance in the race (from senior in charge of direction, to runners who hold the float).

The main event of the festival is the race. Hundreds of men from seven districts must carry 1 ton floats (no wheels!) 5 kilometers through the streets of Gion near JR Kyushu Hakata Station. Due to the incredible weight, the men holding aloft the float are constantly taking shifts, and thus it forms a sea of swirling humans along the path. The men must both maintain speed and a heroic stance without showing weakness. This festival binds the community and all ages gather together for this event. You will see hundreds of children running alongside the float, in practice for the time in 20 or so years that they too can carry the weight on their shoulders.

The race begins at Kushida Shrine, and if you stake out a spot you should expect to see a float every five to ten minutes. In the street you will hear chants of oisa oisa whilst spectators and participants throw water to encourage the hard working men. This is one of the most exhilarating experiences I have had in Japan, being thrown into the crowd and being enveloped in real Japanese culture.

Find out more about Kushida Shrine. 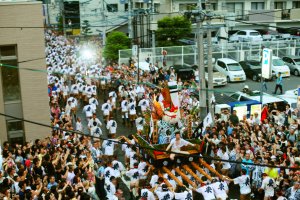 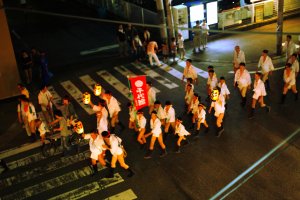 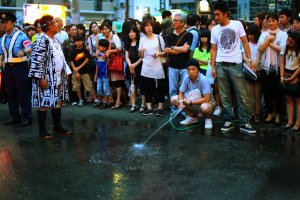 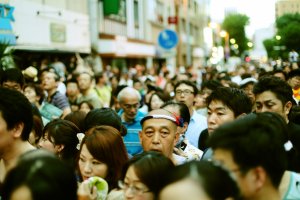 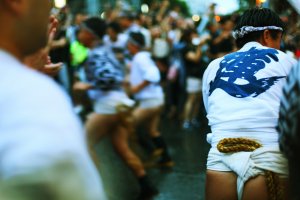 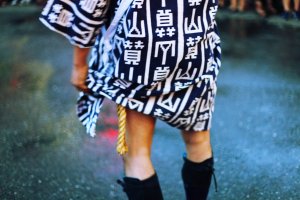 Lynda Hogan a year ago
Great photos, gives a good idea of what's in store at this festival.
Reply Show all 0 replies
1 comment in total