A cosy, friendly place to eat and drink

Arriving in Koriyama later than I'd planned, I found myself looking for lunch close to 2:00pm, so wanted only something light. Close to my hotel, a sign proclaiming ¥500 lunches caught my eye, but it also said "until 2:00pm" (in Japanese). Undaunted by that detail, I went in anyway to check, and the friendly proprietor said I'd be OK to have my lunch. Result!

I have a feeling that this place is like an old-school superhero like Batman, in that its character changes after dark. It's a cosy place with low lighting, with space for just a couple of tables, and a few seats at the well stocked bar. I couldn't check closely, but on the shelves behind the counter I saw plenty of wines, liqueurs and whiskies, including at least five different varieties of Johnnie Walker.

There's quite a classy air to the interior; it's done out in stylish dark wood, there's soft classical music playing (at lunchtime at least), and there are touches of opulence like the bell on the table. It's livened up by some high shelves near the entrance, populated by a mix of objects: old books, whisky advertisements, a London bus. (They are modern enough to offer Wi-Fi though.)

Of the ¥500 lunch options I chose the spaghetti aglio olio, just a simple dish of spaghetti with oil, garlic and cabbage, which came with a little bowl of tasty onion soup, and was followed by a large complimentary iced coffee. It wasn't all that substantial, but the garlic gave it a nice zing, and it was more than reasonable for the low price.

Other, presumably larger lunches come as sets for between ¥900 and ¥1200, which include a salad and dessert: there are pizzas such as prawn mayonnaise, more pasta dishes including a nice-sounding pasta and cream one, and some rice dishes. The drinks are also well priced, with wine, beer and whisky all priced at ¥500, though I saw only the lunch menu and prices may be higher in the evening.

It's just a couple of minutes' walk west from Koriyama station, on the left side of the main road as you walk west away from the station. It's open daily except Sunday from 11:30 to 14:00 (or evidently later if you ask nicely) for lunch, and from 19:00 to 24:00 for dinner. 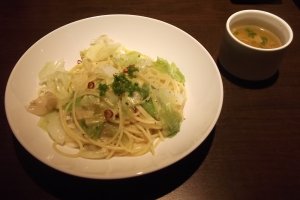 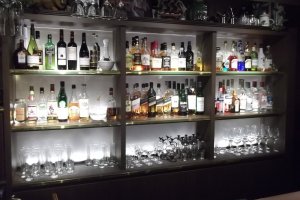 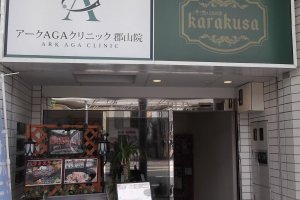