A park for all stages of life; Fertility to Family

Fertility shrines can be found all over Japan. Though not super famous, Meiotoiwa fertility shrine sits among children's playground equipment and next to the Children's Science Museum making Momoyama Park a place for those hoping for kids and those with kids to mingle.

I had seen photos of the park but hadn't been there. In fact I had been past it dozens of times without realizing it.

I parked in the free parking area and walked through "The Star Tunnel" which lit up with the 12 constellations of the zodiac and a drippy space-aged tune.

Exiting, I felt I had been transported to a new location. I walked up a rise and was pleasantly surprised by how green and closed it was from the road and residential area. Most parks I have been to are open with little shade from a hot day. Probably the reason I had missed Momoyama park was because it is surrounded by trees giving visitors shade.

At the top of the rise was a whimsical looking clock and very nice bathrooms. To the right was a path going to the entrance of the Children's Science Museum. Actually everything in the park is to the right of the tunnel and since Momoyama park is compact, everything is only a few meters away.

I walked down the path running parallel to the Science Museum. There is a wicked roller slide (tried it myself), that runs from next to the Science Museum entrance to main path. When you get off the slide, run straight and you are at the small playground with ground cover made from recycled tires. All around are spaces for picnics.

Within 30 seconds of the slide I arrived at the main feature. Momoyama park has a shrine dedicated to fertility which is represented by two rock formations known as Meiotoiwa. When you stand at the shrine, which is right behind the playground, turn and face the rocks. To the right is phallic shaped one while the other is supposed to represent the female genitalia. These are natural formations which have been worshiped by young maidens and couples for centuries.

I was told that during the Edo period women, who stopped at Nakatsugawa Juku on the Nakasendo, on their way to be matched would go to this shrine to pray that they will be able to produce children. There are even woodblock prints of the rocks from this period at the Nakasendo Museum and at the marker of the Nakasendo in Nakatsugawa.

Even today young couples visit the park simply to pray for children. On weekends you can find young couples praying, children playing and grandparents watching grandchildren; those that want, those that are raising and those who have raised.

Just down below the rocks is a bridge flowing over a nice stream. This is the traditional entrance to the shrine. So if you visit for the purpose of praying for fertility, it is best to walk around the outside of the park and enter just next to the Family Mart.

I left Momoyama park wanting to go back with my family. You could go for a few hours or a whole day. It is a place for everyone of all ages offering green space, fun playground equipment, history, culture and science. 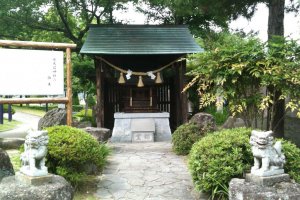 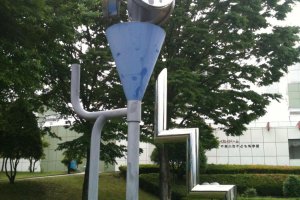 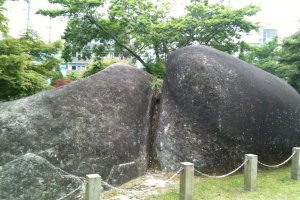 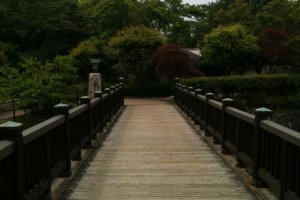