Plan a visit to coincide with the fall foliage

If you haven't heard of Shikoku before, that's likely to change very quickly. This region of Japan comprises of four prefectures – Tokushima, Ehime, Kagawa, and Kochi – and it was named by Lonely Planet on their Best in Travel 2022 list. The nature-filled island makes for a fantastic destination to appreciate the best of autumn's color, and this guide covers 10 places to explore if you visit.

Ranked as one of the three most spectacular gorges in Japan, Kagawa's Kankakei Gorge certainly packs a punch when it comes to autumn color. One of the best ways to take it all in is via the Kankakei Ropeway, which affords visitors views of the gorge and the Seto Inland Sea at the same time.

Okuboji Temple is the last temple on the Shikoku 88 temples pilgrimage route, and it's a place where people come and pray to rid themselves of bad luck. The grounds are home to both ginkgo and Japanese maple trees, with the vibrant yellows and deep reds adding some wonderful pops of color during the autumn season.

With a total area of around 75 hectares, Kagawa's Ritsurin Garden is the largest Cultural Property Garden in all of Japan. It's renowned for having some incredibly picturesque landscapes, and they become even more stunning with pops of color in the form of fall foliage. The garden typically holds an illumination event when the trees are looking their best, and you can get an idea of what to expect via this Japan Travel photo story.

Part of the Shikoku Pilgrimage route, Unpenji Temple is home to plenty of natural beauty year-round. The temple is famous for its hydrangeas in early summer, and is often referred to as the temple in the clouds as it sits 911 meters above sea level. During autumn, around 300 maple trees add some vibrant seasonal color as you can see in the photo below.

Fearuting on the list of Tokushima Prefecture's top 100 sightseeing spots, Konose Gorge is regarded as one of the best places in Shikoku to enjoy blazing red maple leaves. The V-shaped valley is surrounded by large limestone rocks, adding a charming ruggedness to your fall foliage experience.

Originally built in 828, the grounds of Hashikura Temple contain several buildings which have been designated as Important Cultural Properties. The temple is known as a beautiful sakura spot during the spring months, but autumn delivers plenty of seasonal beauty as well. Part of the appeal here is that the changing leaves can be enjoyed for a long period of time, thanks to the elevation difference between the Niomon gate to the main shrine building.

Kotohira Shrine packs a whopping 800 maple trees and 100 ginkgo trees onto its precincts, ensuring there is plenty of autumnal color for visitors to enjoy. On the approach to the shrine there are various souvenir stores and restaurants, including a number of them which specialize in udon noodles – they're one of Kagawa's best known dishes.

As one of Japan's 12 remaining original castles, Ehime's Matsuyama Castle is a must-visit for culture vultures and history buffs. It's located in the heart of Matsuyama City, and provides some spectacular views out over the Matsuyama Plain and the Seto Inland Sea. During autumn, visitors can enjoy autumn foliage at the Honmaru Square at the castle's summit, plus at the Ninomaru Historical Garden on the hillside.

One of Japan's best examples of secluded nature, the Iya Valley is a place where autumn foliage just pops. Set against the emerald green waters of the Iya River, the myriad of colors is nothing short of breathtaking. If you intend to plan a stay in the area, Hotel Kazurabashi is one accommodation option to check out.

Affectionately referred to as the momiji temple, Nishiyama Koryu-ji has around 300 maple trees across its grounds. Located at the eastern foot of the Takanawa mountain range, part of the temple's beauty lies in how enhances the surrounding scenery. Because of how picturesque the temple is during autumn, photographers from across the country are known to flock here when the leaves are at their peak. 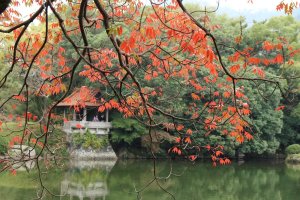 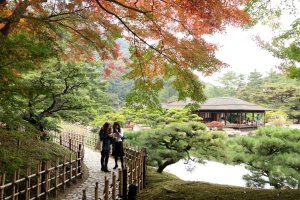 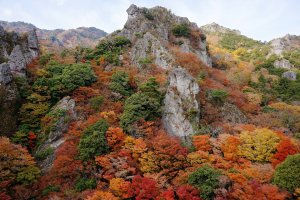 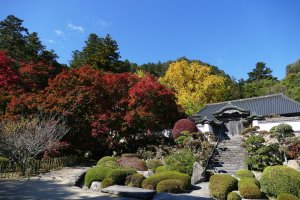 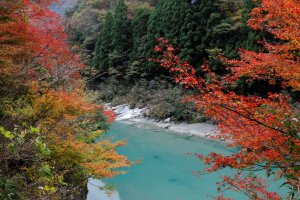 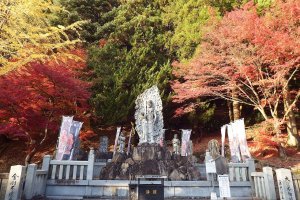